Thomas Perez said at a Senate Judiciary Committee hearing this afternoon that he would keep politics out of his decisions if he is confirmed to lead the Justice Department’s Civil Rights Division. 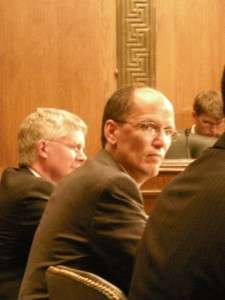 Thomas Perez, President Obama's pick to lead the DOJ Civil Rights Division, testified at a hearing on his nomination today.

“If confirmed, one of my primary goals will be to ensure that decision making is depoliticized,” Perez said. “I will work…to restore trust between the career attorneys and the political leadership.”

Perez, however, is not immune from criticism. An anti-gambling group is against his nomination because of a letter he wrote in his current job as the secretary of the Maryland Department of Labor, Licensing and Regulation that endorses the legalization of slot machine gambling, The Maryland Gazette reports.

“It gets down to the question if you’re going to be the leading advocate for civil rights in America, how does that square with your role as an advocate for state-sponsored predatory gambling,” Stop Slots Maryland executive director Les Bernal told The Gazette.

While the focus of the standing-room-only hearing was on Perez and circuit court nominees Andre Davis and David Hamilton, Sen. Ben Cardin (D-Md.) did point out at the beginning of the hearing that Sen. Tom Coburn (R-Okla.) was the ranking member at today’s hearing, not Sen. Arlen Specter (Pa.), who said yesterday that he will caucus with the Democrats.

We previously reported that Specter, who was a no show at today’s hearing, could be in line to chair a new Judiciary subcommittee. Senate Judiciary Committee spokesperson Erica Chabot declined to comment on the report.