Former New Jersey U.S Attorney Chris Christie is coming in for a rocky landing in advance of Tuesday’s Republican primary election for governor. 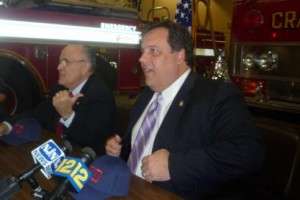 Although Christie has a lead in the polls, conservative challenger Steve Lonegan continues to attack the ex-prosecutor’s ethics and mock his endorsement by former presidential candidate Mitt Romney. Christie campaigned on Friday with another failed GOP presidential candidate, ex-New York Mayor Rudy Giuliani, who’s got his own ethical baggage.

The current fracas: whether a Christie campaign adviser and friend, corporate lawyer John P. Inglesino, received a token job with a New Jersey state senator intended to keep Inglesino on the state payroll, so he would remain eligible for government pension benefits, including life-time health care.

Lonegan released a radio ad Friday criticizing Christie for cronyism and asking Republican voters whether “Christie’s scandals will cost us the election.”

The AP also reported that Inglesino attended Seton Hall law school with Christie in the 1980s, and that Inglesino’s law firm, Stern & Kilcullen, was awarded a $3 million no-bid court-monitoring contract while Christie was New Jersey’s U.S. Attorney. Christie has previously been under fire for awarding another no-bid court monitoring contract worth up to $52 million to the firm run by his former boss, ex-Attorney General John Ashcroft. Click here and here for our previous coverage of the Christie-Ashcroft controversy.

According to the New York Times:

Mr. Lonegan has pushed Mr. Christie farther to the right than he would have liked. Mr. Christie was once a supporter of abortion rights, but now has had to reaffirm — on television — that he opposes abortion, along with same-sex marriage. He ran for the General Assembly in the 1990s saying he favored the state’s ban on assault weapons, but he now tells gun-rights advocates that he wants only to enforce existing laws.

The winner of Tuesday’s Republican primary will face vulnerable incumbent Gov. Jon Corzine (D), whose handling of the economic crisis has caused his popularity to plummet.

UPDATE: Inglesino said he would drop out of the state-supported pension plan that had become controversial, but a pension official said he can’t legally do so unless he quits his job with the Republican state lawmaker.