Arizona U.S. Attorney Diane Humetewa will step down from her post on August 2, The Associated Press reported today. 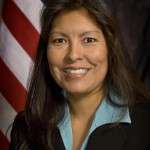 President Obama nominated Phoenix lawyer Dennis Burke earlier this month to be the state’s next U.S. Attorney We reported on Burke’s plans for the Arizona office here. Burke must be confirmed by the Senate before he can take office.