Former Middle District of Georgia U.S. Attorney Frank Maxwell Wood threw his hat into the race for Georgia attorney general as a Republican, The Telegraph in Macon reported today. 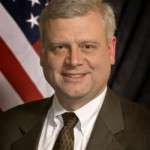 Wood, who resigned as U.S. Attorney Friday, filed paperwork yesterday to run for the office that is being vacated by Georgia Attorney General Thurbert Bake, who is seeking the Georgia governor’s mansion. The former U.S. Attorney is the second Republican to announce a bid for attorney general, The Telegraph said. There are also two Democrats who have entered the race, according to the newspaper.

“This is one of the most important offices in our state when it comes to the safety and welfare of Georgia’s families,” Wood said in a news release, according to The Telegraph. “Experience and qualifications are absolutely vital. I am running to prosecute criminals and protect Georgia’s families. I want no political games, no political posturing.”