At a confirmation hearing today, President Obama’s nominee to head the Justice Department’s Environment and Natural Resources Division defended her experience representing a company that is often at odds with environmental groups. 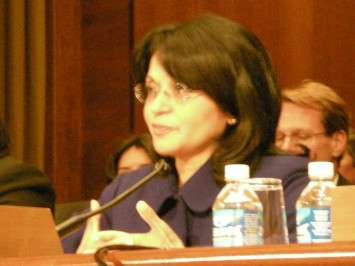 Ignacia Moreno told Senate Judiciary Committee  that her work as a counsel on environmental programs at General Electric Co., along with her time in the Clinton Justice Department as a prosecutor in the Environment and Natural Resources Division, will benefit her if she is confirmed.

“I have seen how it all works on both sides,” Moreno said at the hearing.

Some Environmental Protection Agency attorneys have expressed concerns about Moreno because of her work at GE, according to a  report by ProPublica, a non-profit investigative web site. Moreno over the last two years defended GE in pollution-related lawsuits, sometimes clashing with the EPA over toxic waste sites, ProPublica said. Moreno wrote in her questionnaire to the Judiciary committee that she would recuse herself from any case involving GE for the next two years, in line with Obama administration ethics rules.

Senate Judiciary Committee Ranking Member Jeff Sessions (R-Ala.) said he does not have concerns about Moreno’s job at GE.

“I think it’s nothing wrong for you having been with a major corporation and you have the outside experience too,” Sessions said at the hearing.

Obama nominated Moreno for the post June 8. It’s unclear when she might come before the full Senate for a confirmation vote.

Assistant Attorney General nominees who are till awaiting Senate confirmation include Dawn Johnsen for the Office of Legal Counsel, Tom Perez for the Civil Rights Division, Mary Smith for the Tax Division, and Christopher Schroeder for the Office of Legal Policy. In addition, two U.S. Attorney nominees — Steven M. Dettelbach for the Northern District of Ohio and Carter Mitchell Stewart for the Southern District of Ohio – have already been reported out of committee and “deserve prompt consideration by the full Senate,” Leahy said.