Past and Present Meet at Mukasey’s Portrait Hanging
By Joe Palazzolo | September 10, 2022 9:18 pm

Michael Mukasey, the nation’s 81st attorney general, was typically self-effacing as he described the portrait of him that will hang in the Justice Department hence. 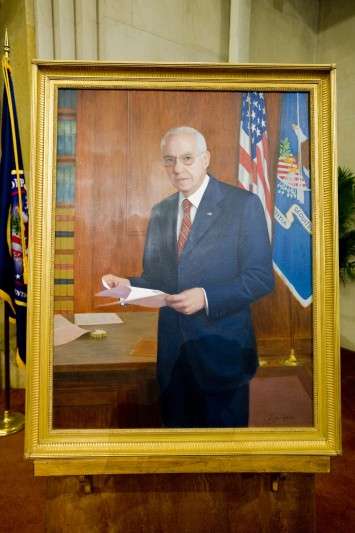 “Thank goodness for artistic license,” he said, drawing laughs from a crowd gathered in the Great Hall Thursday for the portrait’s unveiling, a time-honored tradition.

Eight months after leaving the department, the mild-mannered New Yorker was visibly energized. Mukasey, 68, spoke often and affectionately of the people who served under him during his 15-month tenure. And without hesitation, Mukasey said he would not have traded places with any of the attorneys general who preceded him — even those who served at less tumultuous periods in the department’s history — for anything.

“My fondest wish for the portrait that you are about to see is that it will look out on people who will continue to do what the people I worked with did in the way that they did it,” Mukasey said.

Mukasey, surveying the room, dryly acknowledged what we, lacking his deft touch, might simply call the suck-up culture of Washington and the judiciary.

“It’s been said that the only actual expression in nature of the concept of infinity is the capacity of a federal judge to consume praise,” Mukasey said. “As you may be aware I was a federal judge for 18-plus years. An afternoon like this strains even the capacity I developed over that time to absorb flattery without exploding.”

Mukasey, a former federal judge in the Southern District of New York, took the helm of the Justice Department after Alberto Gonzales resigned. The proud institution had been rocked by allegations it had become less fair and more political, and it was struggling to prove its independence. Confirmed in November of 2007, Mukasey put up barriers between the White House and his department, instituted new hiring policies and appointed prosecutors to investigate the U.S. attorney firings and the destruction of the CIA tapes depicting harsh detainee interrogations.

Filip, who introduced Mukasey, praised his former boss for his independence, rigorous legal mind and quality of work he demanded of others. Facing the fallout of the U.S. attorney firings and devastating internal reports about politically tinged personnel decisions, Mukasey was “the perfect person under the circumstances to lead this department,” Filip said.

“No one accused Michael Mukasey of acting in a partisan or political manner,” Filip said.

Filip described Mukasey as a man devoted to his family and to his home, New York City. He recalled trying to get Mukasey to take a vacation a few days after he left office. Filip, who was still at the department, rattled off destinations — south of France, Hawaii, an African safari — but Mukasey wouldn’t budge.

“Susan and I are in New York finally,” Mukasey told him. “Where in the world would we rather be.” (Mukasey is now a partner in Debevoise & Plimpton’s New York office.)

Thursday’s ceremony, one day before the anniversary of the Sept. 11 attacks, recalled Mukasey’s push to increase the department’s national security capabilities. Under his leadership, the Justice Department succeeded in amending the Foreign Intelligence Surveillance Act to give the government more leeway in acquiring wiretaps, and Mukasey issued guidelines expanding the FBI’s powers in criminal, national security and foreign intelligence surveillance.

At his confirmation hearings, Holder appeared supportive of these reforms, though he said they deserved review. But the department is a markedly different place since the change in administrations. For one, the Justice Department has rescinded Bush-era opinions sanctioning harsh interrogations, including waterboarding. Mukasey’s refusal to equate the tactic with torture — unlike Holder, who has stated unequivocally that waterboarding is torture — nearly derailed his nomination.

Holder’s has expanded the purview of the CIA tapes investigation to include alleged detainee abuse, and the department’s ethics watchdog is nearly finished with a report critical of the lawyers who blessed the harsh interrogations. While in office, Mukasey bristled at second-guessing the work of lawyers who were working under pressure in aftermath of 9/11.

Despite their differences, Holder said Thursday that Mukasey executed his duties with skill, integrity and “great honor.”

“You sacrificed for the cause of country.  And the qualities you showed in your decision to take the job foreshadowed the kind of Attorney General you would become — a soft-spoken but fierce defender of justice who wears his patriotism not on his sleeve but in his heart,” Holder said.

Thursday’s affair stood in contrast with the private ceremony for former Attorney General Gonzales’ portrait unveiling. Gonzales’ was held in the attorney general’s conference room and attended by about 75 of his closest friends and former staff.

Former Attorneys General John Ashcroft and Janet Reno, like Mukasey, unveiled their likenesses before large crowds in ceremonies that included the presentation of the colors, the National Anthem, and lots of standing and sitting.

“Knowing what I now know was a pattern of unacceptable and misguided tactics used by the ATF, I regret that I did not alert others within the leadership of the Department of Justice." -- Lanny Breuer, head of DOJ's Criminal Division, laments not telling his bosses about Fast and Furious gun-walking.