Louisville lawyer Marc S. Murphy at Stites & Harbison found his name floated earlier this year for U.S. Attorney in the Western District of Kentucky. But Murphy also moonlights as an editorial cartoonist for the Louisville Courier-Journal, which runs three or four of his drawings weekly. His cartoons have skewered earmarks, the economy and politicians. But one important politician apparently doesn’t think Murphy is funny.

Since February 2008, Murphy has drawn several cartoons featuring Sen. Mitch McConnell (R-Ky.). The Senate minority leader — not much known for a sense of humor — has been depicted as a pom pom-wielding cheerleader for President George W. Bush, as suffering unintended slights from Paris Hilton and in a barber’s chair seeking a Sarah Palin updo.

“I’ve been a very harsh critic of [McConnell's] positions. There’s no question about that,” Murphy said. However, “He’s a very important powerful person who has done  a lot of good things.” 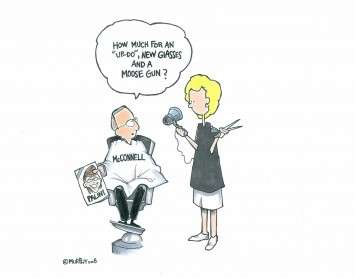 After President Obama’s election, Murphy said prosecutors in the U.S. Attorney’s office in the Western District of Kentucky encouraged him to seek the head prosecutor position. Sometime during the late winter or early spring, Murphy contacted Rep. John Yarmuth (D-Ky.) to express his interest in the job.

Murphy said he’d considered running in 2006 for the seat eventually captured by Yarmuth. But Yarmuth had talked him out of it. After President Obama’s election, Yarmuth considered recommending Murphy for the Louisville-based U.S. Attorney post, according to Murphy and another Kentucky lawyer with knowledge of the process.

While U.S. senators traditionally make recommendations to the president for their states’ U.S. Attorney posts, both senators from Kentucky — McConnell and Jim Bunning — are Republicans. As a result, the Democrats in the delegation,Yarmuth and Rep. Ben Chandler, were in charge of the recommendations.

However, when Yarmuth consulted McConnell earlier this year about his possible recommendations, he got a surprise, Murphy said. According to Murphy, who said he heard the story from Yarmuth, McConnell told the congressman: “You’re not going to recommend that guy who draws those cartoons of me, are you?”

Yarmuth laughed, according to Murphy. McConnell didn’t laugh back. Yarmuth asked McConnel if he was serious.  Apparently so.

Murphy said he hasn’t spoken to Yarmuth since then. Yarmuth spokesman Trey Pollard said the congressman interviewed a number of candidates and selected the most qualified. 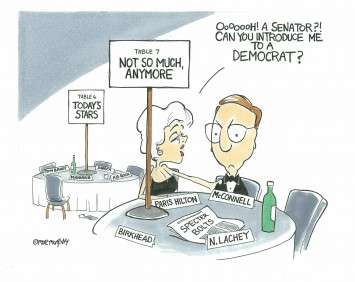 Murphy says he is disappointed but not discouraged. “I’m a very big supporter of President Obama,” adding he “would have been very proud to be part of the Obama administration.” He emphasized that he “didn’t feel cheated” because he “never thought [he] was a top candidate.”

But does Murphy regret drawing his McConnell cartoons?

“My night job got in the way of my public service,” he conceded. However, Murphy said there would have been an upside for McConnell if he’d gotten the job.

“If I became the U.S. Attorney I wouldn’t be able to do cartoons about him anymore.”