Brenda Morris, who is under criminal investigation for her role as lead prosecutor in the dismissed case against former Alaska Sen. Ted Stevens, has left Washington and her position as Principal Deputy Chief of the Justice Department’s Public Integrity Section, according to department officials. 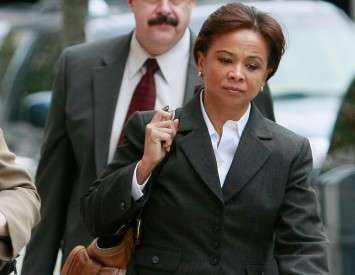 Brenda Morris is under investigation for her role in the dismissed Sen. Ted Stevens case. (Getty Images)

Morris, who remains a senior trial lawyer in the section, moved to Atlanta earlier this week for personal reasons, according to a person familiar with the situation. She began working out of the U.S. Attorney’s Office for the Northern District of Georgia on Sept. 21 and will be based there indefinitely.

“The department asked us to give her some space. We had an office, and we said, ‘Fine,’” said Gentry Shelnutt, the Atlanta office’s criminal chief.

The move represented a mutual decision by Morris and department leadership, one person familiar with the situation said. The parties agreed that Morris, who has been a Public Integrity prosecutor since 1991, and Principal Deputy Chief since 2006, could not carry out her managerial responsibilities from afar, so she shed her leadership role, this person said. The Principal Deputy position has not been filled.

A Justice Department spokeswoman said Morris would continue to handle a full caseload. ”Brenda is a valued senior trial attorney in the Criminal Division, and she continues to work on complex litigation matters across the country for the division,” said Laura Sweeney.

Morris came to the Stevens case late. The Criminal Division’s top brass assigned her as lead prosecutor days before the Alaska Republican was indicted in July 2008  on charges he’d failed to reveal on his Senate financial disclosure forms more than a quarter million dollars worth of gifts and home improvements from a political supporter.

Although Morris is widely admired for her trial skills, her last-minute appointment to the prosecution team grated on Public Integrity Section Chief William Welch II and the prosecutors who built the case, including then-Public Integrity trial attorneys Nicholas Marsh and Edward Sullivan, people familiar with the case have said. But their objections were overruled. Matthew Friedrich, the head of the Criminal Division at the time, and Rita Glavin, his principal deputy, wanted a veteran prosecutor first-chairing the trial, people familiar with their thinking have said.

In June, Marsh and Sullivan were transferred from Public Integrity to the Office of International Affairs, an assignment that keeps them out of the courtroom while Schuelke conducts his probe.

The longest-serving Republican in the Senate and a powerful member of the Senate Appropriations Committee, Stevens denied the charges. With a re-election battle looming, he moved for a speedy trial in hopes of clearing his name before voters went to the polls.

But last October, a jury in the District of Columbia convicted Stevens, then 85 years old, on seven counts. He  lost re-election last November to Anchorage Mayor Mark Begich (D) by fewer than 4,000 votes, or a 1.24% margin.

What appeared to be a major victory for the department soon turned into a high-profile embarrassment. A whistle blower, FBI Agent Chad Joy, accused the prosecution of mishandling evidence in this complaint. The trial judge, Emmet Sullivan, blasted Morris and other members of the prosecution team in a series of post-trial hearings and orders. In April, Attorney General Eric Holder moved to dismiss the case, concluding that prosecutors improperly withheld evidence favorable to Stevens.

After granting Holder’s request and voiding Stevens’s conviction, Sullivan appointed an outside counsel, Henry Shuelke III of Janis, Schuelke & Wechsler, to investigate Morris and her team for possible criminal contempt of court. PIN Chief Welch is also under investigation in the criminal contempt case. A parallel probe by the DOJ’s internal ethics watchdog, the Office of Professional Responsibility, is also underway.

Critics have said the team lost valuable time acquainting Morris with a case that sped from indictment to trial in about two months. But supporters say Morris added ballast  - despite the outcome — and Judge Sullivan publicly hailed her performance during closing arguments as among the best he’s ever seen.