Democratic members of the U.S. Commission on Civil Rights are accusing the agency’s conservative majority of acting in an “improperly partisan” manner in challenging the Obama Justice Department’s handling of the New Black Panther Party case.

The dispute stems from a May decision by the DOJ to dismiss most of a government voter intimidation case filed in the waning days of the Bush administration against members of the militant black-power group, two of whom were videotaped outside a Philadelphia polling place last November in quasi-military garb.

The controversy – which has been fanned by conservative bloggers and commentators and Republican lawmakers on Capitol Hill – has become a significant distraction for Attorney General Eric Holder’s Justice Department and contributed to a delay in confirming Civil Rights Division nominee Tom Perez. 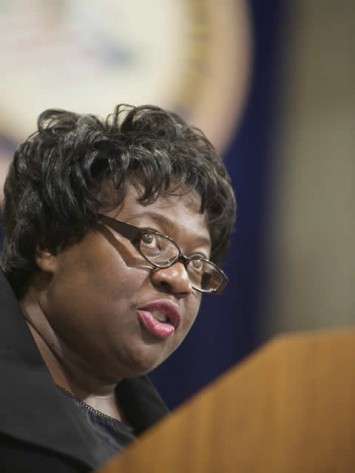 The two Democrats on the eight-member Civil Rights Commission weighed in publicly for the first time last week, sending this letter to Holder outlining their objections.

On Sept 11., the commission voted to devote most of its 2009 annual report to an examination of the Black Panther case, to the exclusion of other civil rights matters, the letter said. Democratic commissioner Michael Yaki walked out of that meeting in protest and did not vote, according to the letter and interviews with commission members.

Yaki and the other Democrat on the commission, Arlan D. Melendez, said in their Oct. 1 letter to Holder that they find the agency’s decision to elevate the matter “deeply troubling.” They added that commission majority does “not have our support.”

“If our colleagues were truly interested in whether our federal government is adequately tackling allegations of voter intimidation, we would support a serious comprehensive review of how all such complaints have been handled by the Department over the past decade,” the Democratic commission members wrote.

Independent commission member Todd Gaziano, director of the Center for Legal and Judicial Studies at the conservative Heritage Foundation, said in an interview, “To suggest that there is some partisan motive is … laughable.”

But the Democratic members of the agency say Gaziano is a leader of the move to elevate the issue. They said in their letter to Holder that the Heritage Foundation official proposed expanding the commission’s investigation and nominated himself to a special subcommittee of the commission that will assume control of the investigation from career commission staff. The Democrats say they are boycotting this special subcommittee probe.

The Democrats also noted that Hans Von Spakovsky, a former Civil Rights Division official who was accused by Democrats of helping politicize the division during the Bush administration, formerly served as a consultant to Gaziano on the commission and now works with him at the Heritage Foundation. Von Spakovsky has been critical of the Black Panther case dismissal, writing in the National Review Online that “liberal and partisan” staff at the DOJ undermine the credibility of an internal ethics investigation now underway by the department’s Office of Professional Responsibility, the letter said.

“Our commission is choosing to devote a substantial amount of its resources to review a single case by the DOJ after years of turning a blind eye to the politicization of the Justice Department by the previous administration,” Yaki told Main Justice in an interview.

Gaziano disagreed with the Democratic members’ characterization of the commission’s motives. Speaking of the DOJ’s decision to dismiss the case, he told Main Justice: “The possible change in practice of policy may have some larger implications… affecting future voting rights enforcement.”

He added: “All Americans of all ideological persuasions would want to understand why the DOJ dismisses suits against persons who wear paramilitary uniforms and shout epithets at voters.”

At issue is an incident last November, where two members of the anti-white fringe group were videotaped standing in front of a majority-black polling place in Philadelphia wearing berets and military-style fatigues. One of the Black Panthers, identified in court papers as Minister King Samir Shabazz, held a nightstick.

Shabazz left the scene without incident after a police officer showed up in response to a call from a Republican poll watcher. The videotape was made by an independent journalist hired by the local Republican Party to monitor polling last November.

It was uploaded to YouTube, where it’s received more than 1 million views, through a site called electionjournal.org, run by a Republican political operative named Mike Roman. The incident was further publicized by the conservative leaning Fox News, which sent a reporter to Philadelphia polling place after the Black Panther members had departed.

The election-day videotape does not record any racial epithets. But the Southern Poverty Law Center has categorized the New Black Panther Party as a hate group for its anti-white rhetoric. Attempts to reach the D.C.-based organization were unsuccessful.

The civil case was filed by the Civil Rights Division on Jan. 7, two weeks before President Obama’s inauguration. It named as defendants the New Black Panther Party; its chairman, Malik Zulu Shabazz; and two members from Philadelphia, King Samir Shabazz and Jerry Jackson.

A Bush political appointee, Grace Chung Becker, signed the complaint in her capacity as acting chief of the Civil Rights Division. Becker wasn’t confirmed by the Senate because of concerns from Democrats that she wasn’t committed to upholding anti-discrimination laws designed to protect minorities.

When the New Black Panther Party and its members failed to contest the lawsuit, the DOJ last spring had to decide whether to seek a default judgment. At that point, the case came to the new acting head of the Civil Rights Division, Loretta King, a career Justice Department lawyer who’s been shepherding the division since Obama was sworn in as president.

King decided the case was shaky. One of the Black Panthers at the polling place, identified by the DOJ as Jackson, was a certified Democratic poll watcher, and there were First Amendment concerns about pursuing a lawsuit against the men based in part on their dress.

“The facts and the law did not support pursuing those claims against them,” Assistant Attorney General for Legislative Affairs Ron Weich wrote in a July 13 letter to Rep. Lamar Smith (R-Texas) the ranking member of the House Judiciary Committee.

The Justice Department did obtain an injunction against the nightstick-wielding Shabazz. But it dismissed the rest of the case, a move Republicans have portrayed as evidence the Obama DOJ is politicized.

“This case may be significant and it is clear only if we have the proper context,” Gaziano said in the interview, explaining why the commission has mounted an independent inquiry.

The Civil Rights Commission is an independent agency with no enforcement powers. It is currently composed of four Republicans, two independents with conservative affiliations, and two Democrats. The commissioners serve staggered six-year terms.

The panel was created by the 1957 Civil Rights Act. But its history of bitter partisan infighting has eroded its credibility over the years and left it marginalized as a player in Washington.

Nonetheless, the commission jumped into the Black Panther fray in June, sending a letter to King asking for more information about a Washington Times report that she recommended dismissal of the case. Associate Attorney General Tom Perrelli, an Obama political appointee who ranks third in the department hierarchy, approved King’s request, the Washington Times reported.

In August, House Judiciary’s Smith asked GOP senators to delay confirmation of Perez, President Obama’s nominee to head the Civil Right Division, because the matter. (UPDATE: The Senate confirmed Perez on Tuesday after months of delay.)

Over the summer, Department lawyers wrote numerous letters to Smith and other Republican lawmakers, and trooped to meetings on Capitol Hill, to explain their handling of the case. Last month the DOJ’s internal ethics agency, the Office of Professional Responsibility, opened an inquiry into the matter, at the request of Smith and other Republicans.

The Black Panther civil case was filed under Section 11(b) of the Voting Rights Act of 1965. The DOJ says it has filed only three such cases in three decades. That meager record of enforcement is what should be under investigation by the commission, the Democratic members said in their letter to Holder.

“[O]ur colleagues apparently want to avoid a detailed review of the Department’s work on this issue during the previous administration, or the bigger question of whether the tools available to stop voter intimidation – including laws addressing ‘voter suppression’ tactics and enforcement funding – are adequate and well used,” Yaki and Melendez wrote.

Department spokesperson Tracy Schmaler declined to comment on the letter to Holder from Yaki and Melendez. But she said: “We are committed to vigorous enforcement of the laws protecting anyone exercising his or her right to vote.”
Debbie Ghamkhar contributed to this report.
RELATED POSTS:
OLDER POST
Ex-Abramoff Associate’s Case Goes to Jury
NEWER POST
Whistle-Blower Claims in Siegelman Case Unfounded, Office Says