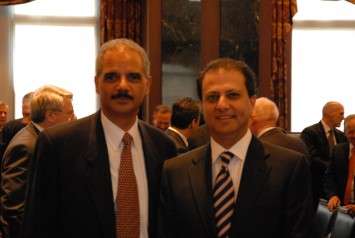 Attorneys General rarely venture out of Washington to attend swearing-in ceremonies for new U.S. Attorneys, according to former Justice Department officials. But Eric Holder has done so three times — deploying the power of his office to anoint rising stars or draw subtle contrasts with the Bush administration.

So far this year, Holder has attended the ceremonial investitures for U.S. Attorneys Joyce Vance in the Northern District of Alabama, B. Todd Jones in Minnesota and Preet Bharara in the Southern District of New York. Both Vance and Jones run offices that were in turmoil during the Bush administration, and Holder — who has said he wants to restore professionalism to the Justice Department — emphasized the department’s new direction by attending the ceremonies.

At the same time, Jones is also an old friend of Holder, while Vance is a respected veteran who is considered an up-and-comer in the department.

And in Manhattan, Bharara heads the largest and most prestigious U.S. Attorney office outside Washington, which prosecutes high-profile financial fraud and national security cases. Bharara is also close to an important Democratic ally on the Hill, Senate Judiciary Committee member Sen. Charles Schumer (D-N.Y.). Bharara was Schumer’s chief counsel before he was confirmed as U.S. Attorney.

Holder’s visits show his willingness to deploy the authority of his office for public relations purposes and to build internal morale. But it remains fairly unusual for an Attorney General to attend swearing-in ceremonies, according to ex-U.S. Attorneys.

The Justice Department doesn’t keep formal count, according to a DOJ spokesperson. It’s unclear how many — if any — ceremonies President George W. Bush’s first AG John Ashcroft attended. Ashcroft told Main Justice in that he couldn’t recall. Also, many of the federal prosecutors who were sworn in under Ashcroft arrived not long after the 9/11 terrorist attacks — not a time for pomp and circumstance. Still, Bush’s first AG commended Holder for attending investitures.

“The more you attend, the better,” Ashcroft said, adding that during his four years of service, he eventually visited about half of the U.S. Attorneys offices. 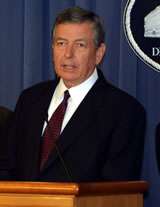 Ron Woods, National Association of Former U.S. Attorneys executive director, told Main Justice that Attorneys General have attended investitures for the District of Columbia U.S. Attorney in the past. But he said their appearances at swearing-in ceremonies outside of Washington are “fairly rare.”

“Our members recall the Attorney General making office visits during their term, but not individual investitures,” said Woods, who served as U.S. Attorney for the Southern District of Texas from 1990 to 1993. “Keep in mind that there are 93 U. S. Attorneys and most of the investitures will occur within a few months of each other. That would be a significant commitment of time and travel by the Attorney General.”

One of the prosecutors Holder got to know was Jones, who was the Minnesota U.S. Attorney during the Clinton administration. Shortly after Jones returned as U.S. Attorney in August, Holder named him chair of the Attorney General’s Advisory Committee, an influential policy-making and advisory body that serves as the voice of the U.S. Attorneys in Washington.

But an Attorney General does not show up to an investiture just to say hello to an old friend, according to former DOJ officials. The nation’s top federal prosecutor also attends swearing-in ceremonies for political and public relations reasons. 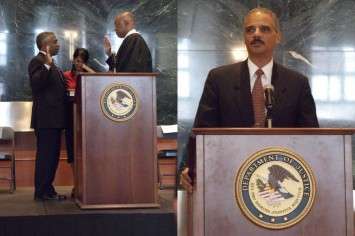 An official trip to a U.S. Attorney’s office by an Attorney General for an investiture or another event will often attract the media, which will draw attention to the office. It is also an opportunity to energize prosecutors in the field. ”When the Attorney General shows up, it shows the importance of the work being done,” Ashcroft told Main Justice.

A Justice Department spokesperson told Main Justice in August that Holder’s first trip to a U.S. Attorney investiture was part of ongoing effort by the Attorney General to reach out to the 94 U.S. Attorneys’ offices.

“The Attorney General is making it a priority to visit U.S. Attorneys’ offices around the country to personally meet with prosecutors and other staff to hear firsthand about the cases they’re working on, the issues they face, and ways in which he can help them do their jobs,” spokesperson Hannah August said this summer. “The visit to the Northern District of Alabama was made to coincide with U.S. Attorney Vance’s swearing-in.”

Regardless of the Attorney’s General reasons behind a trip to a U.S. Attorney’s office, former prosecutors told Main Justice that a visit by the nation’s top federal prosecutor has a major impact on the office. ”It is very meaningful when the Attorney General visits,” said John Richter, who served as the U.S. Attorney for the Western District of Oklahoma from 2005 to 2009.