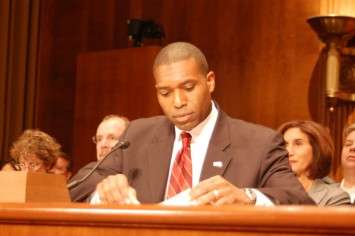 The Department of Justice and Congress are working together to beef up the government’s ability to fight health care fraud.

The act would make a few key reforms, Kaufman said, including changing sentencing guidelines for criminals convicted of health care fraud, make punishments “commensurate with costs” of the fraud, and increase whistleblower payments.

“We have seen an increasing number of sentences of fines for where there is really serious egregious conduct. Fines have just added to the cost of doing business,” Sen. Arlen Specter (D-Pa.) said at the Senate Judiciary Committee hearing this morning.

On the Senate floor Tuesday, Kaufman spoke about the bill, the Health Care Fraud Enforcement Act of 2009. “We must also ensure law enforcement has the tools it needs,” Kaufman said.

West said that “fighting Medicare and Medicaid fraud has become a “Cabinet-level priority,” with the DOJ and HHS’s combined efforts.

The two agencies in May announced the Health Care Fraud Prevention and Enforcement Action Team (HEAT) to pursue Medicare and Medicaid fraud.  ”If we can put these people in prison, we will do that,” West said. “That’s a commitment the department has made.”

At the hearing, Sen. John Cornyn (R-Texas) said he wanted to see the DOJ’s Civil and Criminal Divisions beef up their staff to deal with health care fraud. “The bad guys outnumber the good guys,” Cornyn said. “I don’t know how we can expect [The Centers for Medicare and Medicaid Services] to do a better job, when out of the 4.4 million claims you get every day you can only review 3 percent of them. I’m not sure we are ever going to have enough good guys to outnumber the bad guys in this.”

Sen. Chuck Grassley (R-Iowa) questioned West on the 1,040 pending qui tam lawsuits waiting for the DOJ to sign on. “I find it troubling that some cases are lingering for 36 months,” Grassley said of the whistle blower suits. “Does the Justice Department have a plan to clear this backlog in a timely manner? And if so, what is it?”

Those cases, West said, are being “actively investigated.”