Stephanie Villafuerte has withdrawn from consideration as U.S. Attorney for Colorado amid a barrage of questions from Republicans about her integrity.

In a letter today to Attorney General Eric Holder, Villafuerte, a longtime aide to Colorado Gov. Bill Ritter (D), expressed “deep regret” about dropping out. “At every stage of the process and consistent with Department of Justice protocols for U.S. Attorney nominees, I have honestly and thoroughly answered all questions posed to me,” she wrote. The Denver Post first reported the story Monday on its Web site. 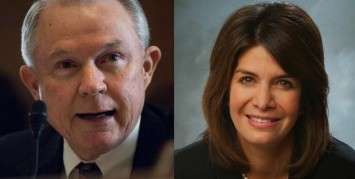 Her withdrawal came just days after Alabama Sen. Jeff Sessions, the ranking Republican on the Senate Judiciary Committee, urged panel Chairman Patrick Leahy (D-Vt.) to delay a vote on the Villafuerte nomination. Sessions said in a letter to Leahy that Villafuerte’s record before the panel was “incomplete.”

Republicans have alleged that Immigration and Customs Enforcement agent Cory Voorhis was treated more harshly than the U.S. Attorney nominee in a controversy surrounding the use of a restricted federal database.

Voorhis lost his job for allegedly using a restricted government database to assist the 2006 campaign of Republican Bob Bob Beauprez, who ran an ad about an undocumented immigrant whose information was in the law enforcement database. Voorhis was later acquitted of charges stemming from the alleged misuse of the database.

Republicans have questioned whether Villafuerte asked people in the Denver District Attorney’s office to access the same database for political purposes, which could be a crime. Villafuerte’s boss, Ritter, was Beauprez’s opponent in 2006 as is a former Denver DA. Ritter has defended Villafuerte in the matter.

“Unfortunately, a needless and extraneous political fight has emerged in Colorado and that fight, in my judgment, has completely overshadowed the deliberative and independent assessment of my qualifications for this important office,” Villafuerte wrote in a letter to President Barack Obama and Attorney General Eric Holder, obtained by the Denver newspaper. “I continue to stand by my statements and maintain that my involvement was appropriate at all times.”

Sen. Mark Udall (D-Colo.) said Villafuerte made the right decision. Udall spoke with Sessions over the weekend about the Republican’s concerns.

“Despite these assurances from Senator Sessions and despite Stephanie’s willingness to answer questions by the Judiciary Committee, it’s clear to me that a further delay in the confirmation is not good for Colorado or the office of U.S. Attorney,” Udall said in a statement. “Stephanie has made a decision in the best interests of the office she hoped to serve, and I respect her for it.”

Pueblo District Attorney Bill Thiebaut Jr. and Denver attorney John Walsh III are still on a list of possible candidates for Colorado U.S. Attorney, according to The Post.