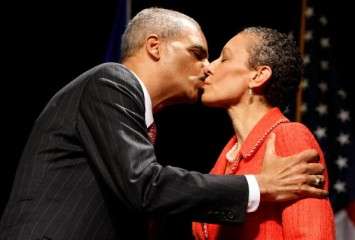 On Sunday, the nation’s top law enforcement officer told worshipers at a Queens, N.Y., church that it was “unacceptable” for men to be absent from their children’s lives. On Tuesday at historically black Morehouse College in Atlanta, he told a town hall meeting that  ”real” men own up to their responsibilities as parents, and that strong family ties reduce crime.

“If we are truly to call ourselves ‘men,’ we must recognize that a defining characteristic of that word is the care and nurturing of those we bring into this world,” Holder said in Atlanta, according to his prepared remarks.”You simply cannot be a real man if you don’t do all that you can to care for those who have the greatest right to depend on you.”

He added: “People sometimes make bad choices. As a result, they end up in prison or jail. But we can’t permit incarceration of a parent to punish an entire family.”

The Atlanta town hall meeting was part of a series of Barack Obama administration-sponsored forums on fatherhood, beginning with an event at the White House this past Father’s Day.

Obama said in June that the initiative was meant to launch a national conversation “about fatherhood and personal responsibility — about how fathers across America are meeting the challenges in their families and communities, and what government can do to support those who are having a difficult time.”

The discussion about black fathers has a long political and social history. In 1965 Daniel Patrick Moynihan, then an Assistant Secretary of Labor in the Lyndon Johnson administration, published a report on the social consequences of unwed black mothers called “The Negro Family: The Case for National Action.” The statistic-heavy report by the future Democratic senator from New York fueled an often polarizing debate about poverty, race and government assistance that lasted decades.

President Bill Clinton, who campaigned for president as a limited government “New Democrat,” enacted welfare reform legislation in 1996 over the objections of many liberals in his party. In 2004, comedian Bill Cosby gave a speech on fatherhood before the NAACP in 2004 that, in sometimes harsh language, criticized black parents who aren’t involved in their children’s lives or set bad personal examples.

Now the country’s first black president and first black attorney general are both striking the same themes, but to little public controversy or even notice.