Dennis Burke, the new U.S. Attorney in Arizona, said the immigration system in the United States is “broken” and “does not reflect economic reality.”

In an interview for a cover story in Arizona Attorney magazine, Burke also said:  ”We’ve created a market for human smuggling that accompanies an already-existing drug-smuggling industry, which flourishes in Arizona. What we have here is a third-world economy next to the most prosperous economy in the world.” 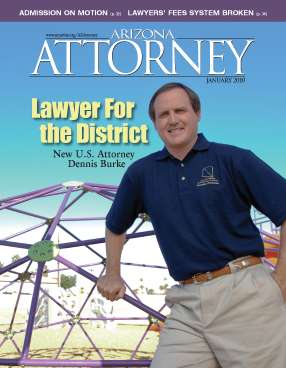 Burke is a former top aide to Janet Napolitano, the former Arizona governor who is now the Homeland Security secretary. Burke is also chairman of the Attorney General’s Advisory Committee border and immigration law enforcement subcommittee.

In Arizona, “we have a combination of very intense border issues that can be violent and drive a lot of the immigration debate in this country,” Burke told the magazine.

More from the interview:

“I’ve believed for a long time that a lot of it boils down to an immigration system that’s been broken. It’s less broke than it has been in the past, because resources have gone into it. But we have a visa system and caps on the number of individuals allowed into this country that have been arbitrary. The result is that the trade for and the smuggling of actual humans in and out of the country becomes an incredibly profitable business. And since it’s an illegal business, it ends up becoming very violent.”

Burke said he hopes his office can help advance comprehensive immigration reform. “We have an obligation to show that we can secure our border under the current system, so that reform can be achieved through Congress. I think the District can… lay a predicate for the fact that overall comprehensive reform can be accomplished because we’re doing our best to secure the border here.”