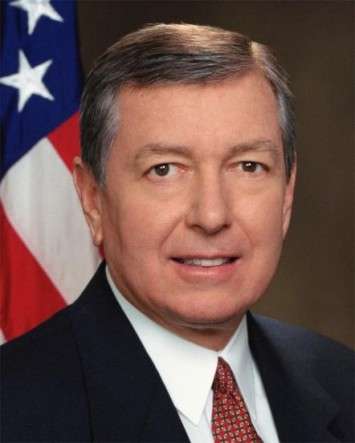 Appearing on Fox News yesterday, former Attorney General John Ashcroft said that “people who insist on jury trials for all people who are apprehended may simply be compromising national security and our ability to gain intelligence.”

“I think we have to be very careful that we have, as our focal point, national security, and that we don’t allow political correctness or institutional or interest groups, if you will, to dictate that we handle things one way, when we should handle them another,” said Ashcroft.

“We need to take people and treat them as — for what they are, is enemy combatants, and they should be processed in a different way,” said Ashcroft.

Ashcroft also told Fox News host Neil Cavuto that racial profiles are frequently misleading and that there are other, more effective measures of risk.

CAVUTO: Would you say the better part of valor would be to screen Muslim-looking men?

ASHCROFT: Well, I think we should screen people who are high-risk. And all of criminal law is a matter of using profiles. We have learned, however, that racial profiles are frequently misleading and that there are other things that really provide better indication where the risk is high.

And, obviously, with the so-called underwear bomber, there were things that should have led us to suspect that he would be eligible for the right kind of screening on the right kind of special attention, if it meant a no- fly list. But the warnings from his family, the kind of fare he purchased in — well, I think a one-way fare with cash, and those kind of things, they are items which we have long known to be indicators of high risk.

(Note: Umar Farouk Abdulmutallab actually bought a round-trip ticket with cash, and his passenger record indicated a return reservation for January. As the Wall Street Journal wrote, this one-way ticket myth has bounced around the media for weeks.)