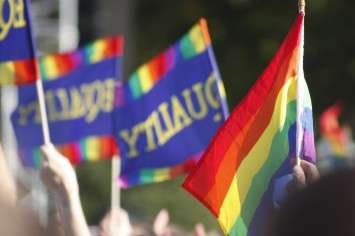 The Civil Rights Division has intervened in the case of a gay teen being harassed by his classmates (file photo by Ryan J. Reilly / Main Justice).

The Obama administration has intervened in a court case on behalf of a gay teenager by using a novel but not unprecedented interpretation of a law intended to ban gender discrimination.

For the first time since President Bill Clinton was in office, the Justice Department is arguing that the protections against sex discrimination laid out in the Title IX, a 1972 education law, apply to gender identity as well.

The documents were filed in the Northern District of New York in connection with a private lawsuit against a school district where a student was allegedly harassed because he is effeminate. The government said it had “authority to intervene to seek relief from denials of equal protection if the matter is certified as a matter of general public importance,” as certified by Assistant Attorney General Thomas Perez.

The student was teased and harassed by his classmates because he was had feminine characteristics, according to the lawsuit. The lawsuit alleges that school authorities did not do enough to intervene.

Title IX declares that “no person in the United States shall, on the basis of sex, be excluded from participation in, be denied the benefits of, or be subjected to discrimination under any education program or activity receiving Federal financial assistance.”

Critics said the Civil Rights Division’s interpretation in this case goes beyond the gender discrimination language of Title IX.

“The school has a duty to keep students safe when they’re at school,” said Roger Clegg of the Center for Equal Opportunity, calling the allegations of assaults troubling although he was not aware of the particular facts of the case. “That said, there’s a problem with DOJ’s interpretation of Title IX. I’m very skeptical about the argument,” Clegg told Main Justice.

“It’s a significant and welcomed returned presence by the Department of Justice to these issues,” Hayley Gorenberg of Lambda Legal told Main Justice. “There were before the Bush administration committees as well as individuals who had done significant work aimed towards the protection of LGBT people and their civil rights, and for years that has just laid fallow, and those efforts have been dormant. It is really exciting to see them come back to life, and this is an example.”

Gorenberg disagreed withe Clegg, saying that “there are strong interpretations of Title IX and other laws that prohibit sex discrimination that can be used to protect gay students.”

Such laws are “validly and powerfully read when there is evidence that discrimination against LGBT people is based on sex stereotyping and gender roles. We lack federal law specifically defending civil rights, so the protections need to be strong need to be put into place.”

Perez has testified in favor of the Employment Non Discrimination Act, which would outlaw employers from firing based on their employees sexual identity. He has also promised to fully enforce the recently passed hate crimes law which protects gay, lesbian, bisexual and transgendered people from bias motivated crimes. Gay Justice Department employees say they have seen progress and an “improved working relationship with this administration.”

The first time Title IX was used on behalf of a harassed gay individual came in 1998, when the Civil Rights Division reached a settlement with Fayetteville Public Schools in Arkansas. In 2007, a federal district court in Indiana ruled that a school can be liable under Title IX for its indifference to bullying of gay students. The court interpreted Title IX’s prohibition on sex discrimination to include discrimination against individuals because of their failure to conform to sex stereotypes.

Court documents filed this week say the Justice Department is intervening in the case because of violations of Title IX as well as the Equal Protection Clause of the Fourteenth Amendment, one count of negligent supervision, and violations of several provisions of New York human rights laws.

The teen, identified as “J.L.” in court documents filed by his father, Robert Sullivan, allege that the principal of Gregory B. Jarvis Jr./Sr. High School and the official charged with enforcing Title IX in the Mohawk Central School District in New York were indifferent to his harassment.

“J.L. is a fourteen year old male whose gender expression does not conform to male stereotypes. J.L. dyes his hair, wears make-up and nail polish, and engages in physical expressions that are stereotypically female, e.g., swinging his hips and singing in a high pitched voice,” according to court documents.

The complaint alleges that when J.L. was in seventh grade, students at the school subjected him to verbal sex-based harassment on a regular basis. His father complained multiple times to the school, but “the district failed to investigate, or conducted incomplete investigations of the allegations,” according to court documents.

Gorenberg said her group had been in serious, detailed discussions with the Civil Rights Division, and they are hopeful there will be action taken to support LGBT (lesbian, gay, bisexual and transgender) rights.

Assistant U.S. Attorney William F. Larkin in New York worked on the case, as did lawyers Amy I. Berman, Whitney M. Pellegrino and Amanda M. Downs of the Educational Opportunities Section in the Civil Rights Division.

The government’s intervention in this case was first reported by Ari Shapiro, whose NPR story will be available online Friday evening.

Court documents from the case are embedded below.