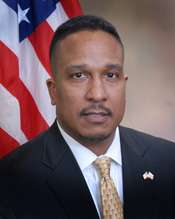 Ronald Machen, the newly confirmed U.S. Attorney for the District of Columbia, took his oath of office Thursday evening in a private ceremony, a spokesman said.

Machen, a former partner at Wilmer Cutler Pickering Hale and Dorr, replaced Channing Phillips, now the office’s Principal Deputy, who had served as acting U.S. Attorney since May.

The Senate confirmed Machen by unanimous consent on Feb. 11. A former federal prosecutor in D.C., Machen returned to the nation’s largest U.S. Attorney’s office on Thursday, completed his paperwork, and later headed a few blocks south to the U.S. District Court for the District of Columbia to take the oath.

Chief Judge Royce Lamberth, also a former Assistant U.S. Attorney in D.C., administered the oath in his courtroom. A group of judges, supervisors in the U.S. Attorney’s office and Machen’s friends and family were on hand.

A second, larger swearing-in ceremony is in the works, though a date has not been announced. One likely guest of honor: Attorney General Eric Holder. The commute is a breeze, and Holder is a former U.S. Attorney in the District.