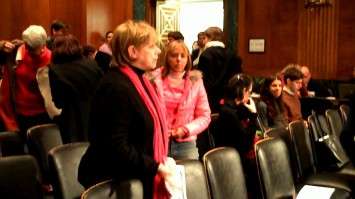 At the conclusion of Friday’s Senate Judiciary hearing on the Office of Professional Responsibility’s look into the authors of the so-called “torture memos,” two protester from Code Pink asked pointed questions to Sen. Patrick Leahy (D-Vt.) — which he ignored — about why key witnesses were not called to testify.

She also asked why David Margolis was not forced to testify at the hearing.

Earlier in the hearing, Leahy asked Benjamin to lower her sign, which was positioned to be within the frame of the C-SPAN camera broadcasting the hearing.

Video of the conclusion of the hearing is below.