The total amount of marijuana seized by the Drug Enforcement Administration nearly doubled from 1,539 metric tons in fiscal 2008 to 2,980 metric tons in last year.

The numbers were disclosed as part of the DEA’s budget request for fiscal 2011. 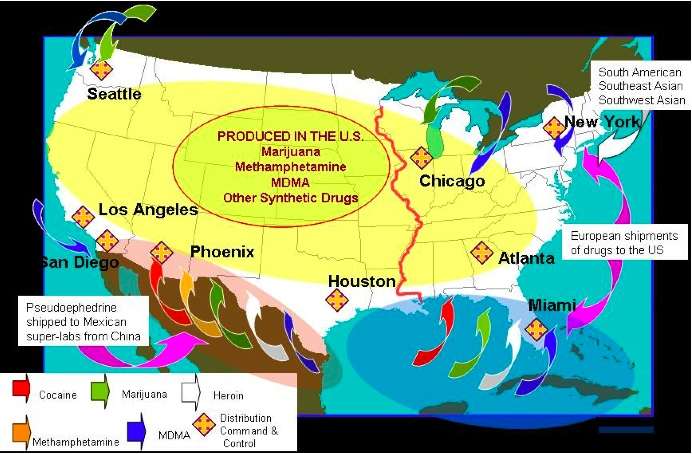 A chart shows the flow of drugs into the United States (DEA).

A spokesman for the DEA declined to elaborate on the reason for such a dramatic rise in seizures of marijuana.

“Several factors play into this number and in any given year the amount of drugs seized by DEA can fluctuate,” said spokesman David Ausiello.

Aaron Houston, the director of government relations of the Marijuana Policy Project, a lobbying group that advocates the legalization of marijuana, said he suspected the increase was a result of drug seizures from cartels.

Despite Attorney General Eric Holder’s announcement that targeting individual users of cannabis for medical purposes was no longer a priority, the DEA budget request spoke dismissively of the benefits of medical marijuana, even placing the word patients in quotation marks.

“DEA does not investigate or target individual ‘patients’ who use cannabis, but instead the drug trafficking organizations involved in marijuana trafficking,” the request stated.

Houston applauded the Obama administration for its decision to stop raiding medical marijuana facilities in states that allow the practice. But said Houston, “on the rest of their drug policy, they’re on Bush administration auto-pilot.”

The DEA request said that there has been no Food and Drug Administration research that shows the benefits of medical marijuana. But the DEA has blocked such research from taking place, according to Houston. Just a few days before Obama was sworn into office, Houston said, the DEA refused to grant approval for a University of Massachusetts Amherst study into medical marijuana.

“It’s pretty cynical for DEA to claim on the one hand that we have to wait for the science to come in, and with the other hand literally block that research from happening,” said Houston.

The DEA’s full budget request is available on the Justice Department’s Web site.