Earlier Wednesday, Justice Department officials confirmed to FoxNews the list of DOJ attorneys dubbed the “al-Qaeda Seven” — a group of lawyers lambasted in a Keep America Safe advertisement who represented Guantanamo detainees prior to their government service. 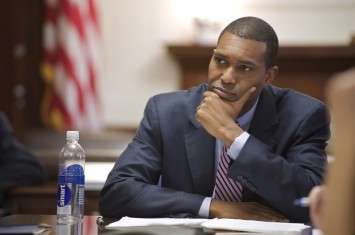 Surprisingly, that list includes Assistant Attorney General for the Civil Division Tony West, despite the fact that his representation of “American Taliban” John Walker Lindh has long been public knowledge.

In 2002, West joined a team of lawyers that represented Lindh. He discussed the case on a chat with The Washington Post back in 2002 and has appeared in numerous news articles as one of Lindh’s lawyers.

“West’s representation of Lindh is probably his best-known work, and was prominently mentioned in the ledes of several articles reporting on his nomination,” writes Media Matters.

West’s representation of Lindh was brought up during his confirmation hearing in March 2009, but few voiced any opposition to his nomination at that time. Ultimately only four Republican senators voted against West’s nomination. Sen. Charles Grassley (R-Iowa), who has pressed for information on the detainee lawyer issue, voted in favor of West’s confirmation.

Although West was not identified by name, on Feb. 18 Assistant Attorney General for the Office of Legislative Affairs Ronald Weich publicly acknowledged West’s role in the Lindh case. In a letter to Grassley, Weich wrote that “the Assistant Attorney General for the Civil Division previously represented one Afghanistan detainee, and his former employer represents other detainees.”

A spokesman for Keep America Safe said that disclosing solely the position of someone who represented terrorism suspects - even if there is only one person who fit such a description - is not good enough.

“If you only give the position and not the name, it’s another barrier to disclosing information that should be readily available,” Aaron Harison of Keep America Safe told Main Justice.