The Justice Department’s Information Service Center is experiencing a higher than normal influx of calls from people who want to complain about the government lawyers who previously represented Guantanamo detainees. 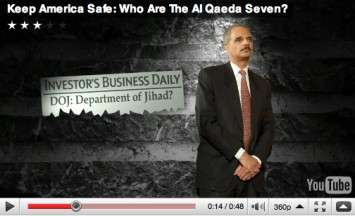 A screen shot from the advertisement put out by Keep America Safe attacking Attorney General Eric Holder and the Justice Department.

When a Main Justice reporter called the number Tuesday, a DOJ operator who answered said it was one of the busier days in recent memory and that many callers referenced an advertisement put out by Keep America Safe, an organization founded by Liz Cheney, the daughter of former Vice President Dick Cheney, and Bill Kristol of The Weekly Standard.

A Justice Department spokesman declined to comment on the center’s call volume.

At the Conservative Political Action Conference in February, Liz Cheney slammed President Barack Obama and Attorney General Eric Holder for their handling of terrorism related issues. Their latest attack revolves around DOJ’s refusal to disclose the names of seven lawyers at the Justice Department who previously represented terrorism suspects.

Justice Department spokesman Matthew Miller told Main Justice that the letter that DOJ sent to Congress regarding the employees who previously represented Guantanamo detainees answered most of the questions.

Some liberal critics struck back at the ad, even calling the tactics “McCarthyism.”

“It’s not kind of like McCarthyism, it is exactly what Joe McCarthy did with his Communist witch hunts,” Ken Gude of the Center for American Progress told TPMmuckraker. “Cheney accuses the Attorney General of the United States of being a supporter of al Qaeda and running the ‘Department of Jihad,’” a reference to the Investor’s Business Daily editorial that is featured in the Cheney ad.

Miller declined to join such criticism, but said it is helpful to remind the public that terrorism suspects had been prosecuted in criminal court during previous administrations.

As Josh Gerstein wrote in Politico, the Bush administration did not tolerate a similar line of attack made by Defense Department detainee affairs chief Charles Stimson in 2007. He called for a boycott of law firms doing pro bono work for Guantanamo detainees. The Pentagon  distanced itself from Stimson’s comments, writes Gerstein, “which were condemned by a broad array of voices in the legal community. Stimson eventually apologized and resigned a short time later.”

Chris Matthews contributed to this report.