In late 2008, a turf battle between the Federal Bureau of Investigation and the New York City Police Department was brewing. Overlap in counterterrorism work had always been a source of tension between the local cops and the feds. But the situation reached a boiling point when the contents of tense letters between then-Attorney General Michael Mukasey and NYPD Commissioner Ray Kelly on warrants for domestic electronic monitoring of terrorism suspects were published in The New York Times.

To improve that relationship, FBI Director Robert Mueller brought former FBI agent Joe Demarest back to the bureau from his brief stint in the private sector to head the FBI’s New York Division. Just five months later, in May 2009, both federal and New York officials said the relationship had improved.

Now the man who brought about that change has been reassigned to FBI headquarters in Washington, awaiting the results of an investigation into statements he made about his relationship with a colleague. Several outlets have reported that relationship was with Teresa Carlson, an FBI intelligence official who previously headed the white collar section of the New York office’s Criminal Division and was recently promoted to a position in Washington. 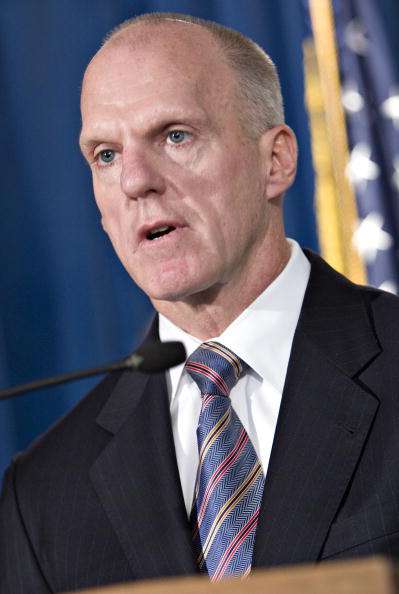 The FBI is publicly saying that Demarest is working on a project in D.C., former Newsday reporter Len Levitt wrote in the Huffington Post. FBI spokesman Richard Kolko said that Demarest was helping to develop a computerized crime strategy program, something called Strategy Performance Sessions, or ‘COMPSTAT LITE,’ reported Levitt.

The investigation by the FBI’s Office of Professional Responsibility into Demarest’s statements about the relationship has been going on for months, according to those familiar with the situation.

The investigation is focused on Demarest’s statements about the relationship, rather than the relationship itself. Internal FBI guidelines do not ban personal relationships, but do require recusal in career decision such as bonuses, which are usually decided by a board, according to a former federal official. Levitt reported that it was not clear how much influence Demarest had over Carlson’s career, but there was always at least a level of management between the two.

Mueller’s choice of Demarest to head the New York office upset many rank-and-file FBI agents, who felt that Mueller had gone outside the chain of command by bringing on a former agent who left for a lucrative position in the private sector.

In early 2008, Demarest had been seen as the odds-on favorite to take over the New York office, even working with Mueller on a top-secret project. But Demarest reportedly did not want to be assigned to FBI headquarters in D.C. — considered a must in order to climb the ladder — and announced his retirement to become the head of international security for Goldman Sachs.

The move was especially surprising because Demarest left at age 48, only months shy of 50 when he would have been eligible for a full pension for life.

After less than a year at Goldman, Mueller lured Demarest back to the FBI, believing he could improve the bureau’s relationship with what some FBI agents called the “renegades” in the NYPD counter-terrorism unit.

Within the FBI, “there was a lot of concern over the fact that he had left and then came back,” one former federal official said. “There were a lot of people who wanted the job, and bringing back someone who had quit certainly ruffled a lot of feathers.”

Several former federal law enforcement officials said the complaint that sparked the investigation into Demarest could have originated with someone who felt passed over for the position as New York City’s top G-Man.

“It very well could be sour grapes, that somebody had a beef,” one official said.

Others pointed out that many in the FBI disliked Demarest’s management style.

Demarest and Kelly share a lot in common. They’re both fitness enthusiasts, sharp dressers and have a military bearing, according to a NPR profile when Demarest was tapped in 2008. Under Demarest’s leadership, the relationship between the FBI and NYPD has reportedly improved.

NYPD officials reassigned personnel because of the mistake — an unusual admission of the error — and the controversy over the lapse flared up for only a couple of days.

One federal law enforcement official said that Demarest had made “significant inroads” in improving the FBI’s rapport with the NYPD, an impressive achievement, as changing the dynamic between the two agencies was like trying to “turn an aircraft carrier around,” he said.

Joe Palazzolo contributed to this article.