In a letter to two Republican senators Friday, Attorney General Eric Holder apologized for not listing several friend-of-the-court briefs on the Senate Judiciary Committee questionnaire during his confirmation process last year. But Holder maintained his current position on executive power is consistent with what he expressed in the briefs.

A National Review column published earlier this month blasted Holder for not disclosing on his questionnaire two Supreme Court amicus briefs in the high-profile terrorism case of Jose Padilla that he had joined in signing. In one of the briefs, Holder and several former DOJ officials from the Clinton administration argued that the danger of a too-powerful executive branch outweighs the risk of losing intelligence in terrorism cases prosecuted in civilian courts.

Republicans pounced on the omission and several days later, the DOJ turned over to the Senate half a dozen Supreme Court briefs Holder neglected to disclose. 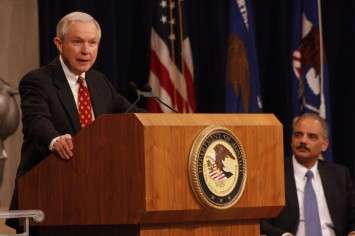 In a letter Friday addressed to Senate Judiciary Committee Republicans Jeff Sessions of Alabama and Jon Kyl of Arizona, Holder wrote that the omision occurred because his initial reviewers relied on his law office files, which were incomplete. Later during the confirmation process, a second set of reviewers found the Padilla briefs but left them out because they “understood that question to call for briefs on which I had been the lawyer, not the client,” Holder wrote.

“Although it does not excuse my failure to list these briefs, I note that they have always been included in widely available legal databases, and have never been hidden from public view at all,” he added. “The bottom line, of course, is that I should have included these documents in my submission to the Committee. I am aware of no other inaccuracies in my questionnaire, and none has been brought to my attention.”

Last Friday, Sessions and Kyl sent a letter to Holder concerning the briefs and said they planned to question him at a panel oversight hearing on “the apparent contradictions” between his current views on terrorist detention and what he previously expressed in the briefs. That hearing was later postponed and rescheduled for April.

“Having now reviewed these briefs, we are concerned that some of the arguments contrast sharply with statements you made as Attorney General in defense of civilian trials for Khalid Sheikh Mohammed (KSM) and his fellow 9/11 co-conspirators,” the senators wrote in the letter last week.  “Your brief also contrasts with the administration’s defense of its interrogation and civilian criminal handling of the Christmas Day bomber, Umar Farouk Abdulmutallab.”

In the response Friday, Holder said the amicus brief was fully consistent with his current view that the “criminal justice system remains a powerful weapon in our arsenal.”

“To be sure, the brief acknowledges the fact that, in light of legal constraints, there might be ’some hypothetical situation’ in which it may not be possible to use our numerous law enforcement tools to arrest and extract information from a U.S. citizen who we suspect is linked to terrorist activity,” Holder wrote. “This merely states the obvious fact that there may be limitations upon the ability of the executive branch to restrict the liberty of U.S. citizens, at least absent further authorization from Congress.”

He continued, “as noted in that brief, Congress has provided the president with comprehensive and extraordinary powers to fight terrorism without making claims that strain the Constitution. Where necessary, the president should work with Congress to obtain additional authority.”

As an example, Holder cited the Bush administration’s work with Congress to pass the USA PATRIOT Act.

“We are safer today because we have those tools,” Holder said of the Patriot Act.

The full text of the letter is embedded below. Leah Nylen contributed to this report.