A provision in the newly passed health care law could give the Justice Department an extra tool in investigations of state-run institutions and prisons — including in its high-profile probe of an obstreperous Arizona sheriff under scrutiny for his law enforcement record. 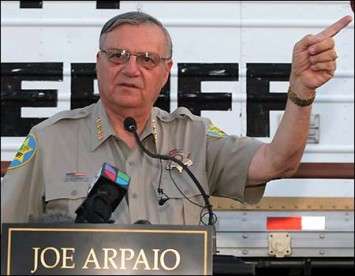 One of the federal probes targeting Maricopa County Sheriff Joe Arpaio involves his treatment of jail inmates, including those rounded up in illegal immigration sweeps. Last year Arpaio, a vocal opponent of illegal immigration, marched 220 undocumented inmates chain-gang style down a public street in Phoenix in what The Mexican American Legal Defense and Educational Fund called a publicity stunt designed to humiliate them.

The health care law signed by President Barack Obama last month contains a little-noticed provision that allows the Attorney General to expedite subpoenas from any institution that is the subject of a Civil Rights of Institutionalized Persons Act (CRIPA) investigation. That includes the Maricopa County jail run by Arpaio and facilities around the country.

The DOJ’s enhanced subpoena power is aimed at probing conditions at government-run prisons, mental health facilities and nursing homes generally — and not specifically at “Sheriff Joe,” as Arpaio has become known. But Arpaio has charged that the federal investigators have targeted him for his politics, an allegation that has raised the profile of his case. His resistance to federal oversight has also vexed the DOJ.

The sheriff has accused Justice Department lawyers of posing as reporters to gain access to one of his news conferences and been rebuked by the head of the DOJ’s Public Integrity Section for making misleading statements.

Enacted in 1997, CRIPA allows the Justice Department Civil Rights Division’s Special Litigation Section to investigate whether such public facilities have a pattern of violating rights. The law is aimed at exposing patterns of abuse, such as neglect at nursing homes or inadequate access to mental health care.

CRIPA applies only to public institutions including prisons and jails, juvenile correctional facilities and state- or locally-run nursing homes or facilities for the mentally ill or developmentally disabled.

Under the new health care law, the Civil Rights Division has the power to subpoena documents from institutions under investigation without going through a grand jury or a judge. The new power is designed to allow federal investigators to proceed with cases in which subjects have been uncooperative or refused to turn over documentation voluntarily. The Justice Department already has similar power to investigate health care fraud.

A Justice Department spokesman declined to comment for this article.

While the DOJ hasn’t used the subpoena powers yet, ongoing or recent CRIPA investigations have been reported in states including Indiana, Georgia, and New York.

Amy Fettig, staff counsel of the American Civil Liberties Union’s National Prison Project, said she is hopeful the new powers will help the Justice Department thoroughly investigate the conditions in state prisons, which she called a “national disgrace.”

“It’s an important step because, under CRIPA, state governments do not have to cooperate,” said Fettig. “It’s an extra tool in their toolbox.”

A transition report on the Civil Rights Division found that the Special Litigation Section under the George W. Bush administration had been micromanaged in a way that prevented it from formulating a meaningful agenda. In particular, it found that enforcement of CRIPA had “proceeded at a snail’s pace and resulted in relatively few enforcement actions.”

“I’m excited to see new leadership in special litigation,” said Fettig. “The most important thing that DOJ can do is to show more leadership on this issue. It’s a national disgrace and federal leaders should be investigating and calling for reform.”