The U.S. Commission on Civil Rights has tried for months to get Justice Department officials to testify on the department’s handling of a November 2008 case against the New Black Panther Party. Now Assistant Attorney General Thomas Perez has agreed to testify before the commission next month, where he’ll face questioning about a case that has been a favorite punching bag for conservatives for nearly a year and a half. 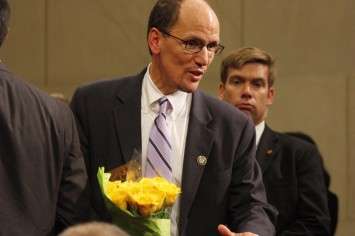 According to a letter obtained by Main Justice, The Justice Department and the commission agreed that Perez would testify separately from the hearing scheduled this Friday, which will feature several Republican poll watchers and a former Bush administration official. Perez’s testimony will take place on May 14 in a round-robin format that allocates each of the eight commissioners five minutes at a time.

Perez was not at the Justice Department when the Civil Rights Division decided against pursuing the case, which was filed by a career lawyer with a conservative background in the waning days of the Bush administration.

On Election Day in November 2008, two members of the New Black Panther Party dressed in military garb and stood outside a Philadelphia polling place. One of the men carried a nightstick, which some alleged was intended to intimidate voters. A lawyer in the Bush administration filed a case against the men and the New Black Panther Party. After the Obama administration took office, another career lawyer appointed to acting head of the Civil Rights Division determined the case had no merit. The department dropped the case and obtained an injunction against the man with the nightstick. House Republicans cried foul, and the conservative-controlled U.S. Commission on Civil Rights took up the case.