The Justice Department has reached an agreement with an Illinois Sheriff’s Department to correct violations of inmates’ constitutional rights at the nation’s largest county jail.

An investigation in 2007 and 2008 found that the officials at Cook County Jail in Chicago systematically violated the rights of inmates through the use of excessive force, failed to protect inmates from harm by fellow inmates and did not provide adequate medical or mental health care. 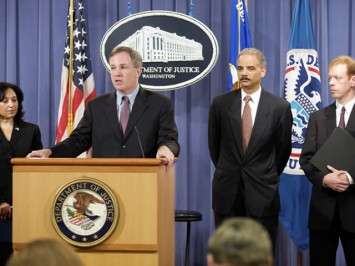 U.S. Attorney for the Northern District of Illinois Patrick Fitzgerald speaks at a press conference. (DOJ)

On Thursday, the DOJ filed a 60-page agreement in U.S. District Court along with a new lawsuit against the county. The agreement requires the Cook County Sheriff to hire 600 additional corrections officers for the jail, which has an average daily population of more than 8,500 inmates spread across several buildings on 96 acres on Chicago’s West Side.

The agreement also includes provisions intended to address the jail’s reputation for the use of excessive force, according to the Justice Department. Under the terms of the agreement, which will require approval from a federal judge, four independent monitors will oversee the implementation of several measures such as increased supervision and the installation of more electronic surveillance.

“It is a jurisdiction’s basic responsibility to protect those persons in its custody from harm and to uphold their constitutional rights,” Thomas Perez, Assistant Attorney General for the Civil Rights Division, said in a statement. “We have worked cooperatively with Cook County officials to craft an agreement to ensure that the constitutional rights of Cook County Jail inmates are protected, and we commend Sheriff [Thomas] Dart, Cook County and the Cook County Department of Corrections for their willingness to work aggressively to remedy these problems.”

“We are pleased that with the cooperation of Sheriff Dart and the County, we have achieved a rigorous, comprehensive agreement that will remedy the unconstitutional conditions that were found at the Cook County Jail,” said Patrick J. Fitzgerald, U.S. Attorney for the Northern District of Illinois. “Inmates are entitled to conditions of confinement that pass constitutional muster.”

The Civil Rights Division has several ongoing or recent CRIPA investigations, including ones in Indiana, Georgia, New York and Maricopa County, Ariz.

Testifying before the House Judiciary Committee on Thursday, Attorney General Eric Holder was asked about the CRIPA investigation into the Maricopa County jail and Sheriff Joe Arpaio.

“The sheriff has unfortunately decided not to cooperate with the investigation and so I think that makes our job a little more difficult but …the review is underway,” Holder said.