The new U.S. Attorney for the Western District of New York is not bashful about expressing his dedication to the Justice Department. He sees it every time he walks into his office. 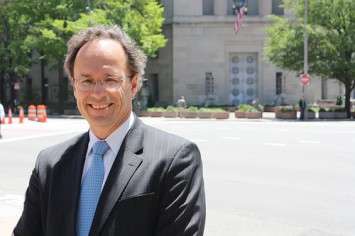 U.S. Attorney William J. “Bill” Hochul Jr. decided against decorating the back wall of his office with the trophies, awards and photos that adorned the space during the tenures of his predecessors. Instead when he became the U.S. Attorney in Buffalo, N.Y., last March, he hung only the DOJ seal in the prime spot.

“It is always in my mind,” Hochul said in a recent interview with Main Justice.

Hochul has hit the ground running since he was sworn in on March 12. Hours after the swearing-in ceremony, Hochul was on the phone with a federal agent about the arrests of gang members in Niagara Falls, N.Y. In the following weeks, an alleged Ponzi schemer and police officers accused of civil rights crimes pleaded guilty in federal court under his watch.

“I’m just enjoying every moment of it,” Hochul said. “I underestimated how rewarding it is.”

He said his “day begins early and ends late.” The U.S. Attorney, a former martial arts instructor, said he practices karate and does a little reading before he gets to work at about 7:45 a.m.

Hochul is constantly walking the halls at the U.S. Attorney’s office and conferring with prosecutors during the day. At night, he meets with community groups and often has speaking engagements.

Former FBI agent Thomas Thurston, who worked with Hochul, said it is rare to have a U.S. Attorney with the type of prosecutorial experience that Hochul has.

“I’ve seen other U.S. Attorneys in the courtroom and there’s no comparison to the experience Bill brings to the job,” Thurston said.

Hochul helped successfully prosecute the “Lackawanna Six,” six Yemeni-American men who were sentenced to prison in 2003 for providing material support to al-Qaeda. The case was the first prosecution of U.S. citizens who were recruited on American soil to attend a terrorist training camp.

“He was very excited about the opportunity to apply the law to something like this,” said Peter Ahern, who was the special agent in charge of Buffalo’s FBI office during Lackawanna case. Ahern added that the Hochul is the “perfect prosecutor” for the FBI and other law enforcement agencies working on cases.

The case drew national media attention, bringing accolades to Hochul. He was awarded the Attorney General’s Award for Exceptional Service – DOJ’s highest honor – for his work on the case.

Hochul applied for a counterterrorism posting in D.C. at the DOJ’s Executive Office for U.S. Attorneys in 2006 after completing several successful terrorism prosecutions. But a DOJ official, Monica Goodling, who was involved the 2006 U.S. Attorney firings, refused to promote him because his wife, Kathy, was a Democrat, according to a 2008 DOJ Inspector General report.

Kathy Hochul, who has been married to the U.S. Attorney for more than 25 years, is active in Democratic politics. She served as a legal counsel and legislative assistant to former Sen. Patrick Moynihan (D-N.Y.) and former Rep. John LaFalce (D-N.Y.) She is currently the Erie County Clerk in New York — the highest-ranking elected woman official in the county.

Goodling, a junior lawyer at the department who became a political gatekeeper on some hiring decisions, insisted that “a much less experienced, but politically acceptable” Assistant U.S. Attorney received the counterterrorism post, the IG report said.

The Assistant U.S. Attorney who got the job didn’t have familiarity with counterterrorism cases or the minimum five years of federal criminal prosecution experience required by the DOJ job posting. But he was a registered Republican.

“Certainly, the IG report speaks for itself,” Hochul said. “I don’t have anything to add to the findings.”

Hochul became the chief of the office’s National Security Division in 2006. He continued to handle high-profile terrorism cases, including the 2008 murder of a U.S. diplomat in Sudan and the 2008 bombing of the U.S. embassy in Sanaa, Yemen.

Four men in Sudan received death sentences for shooting and killing South Buffalo, N.Y., native John M. Granville as he was driven home after a New Year’s party. The investigation into the U.S. embassy bombing is ongoing.

But 2008 wasn’t the first time Hochul traveled overseas as a prosecutor. The U.S. Attorney said he has visited “virtually every continent” to lecture foreign judges, prosecutors and law enforcement officials about the U.S. justice system.