James Comey, the former Deputy Attorney General who in 2004 infuriated the White House by refusing to go along with the Bush administration’s warrantless domestic eavesdropping program, is stepping down as general counsel and vice president at Lockheed Martin to take a job at a Connecticut hedge fund, Lockheed said on Wednesday. 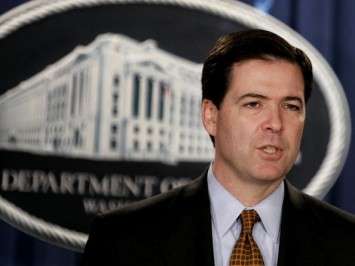 Comey will take a position at Bridgewater Associates later this summer as a member of a senior management committee at the company, which manages more than $70 billion in investments for endowments, governments and central banks in nearly 20 countries.

Comey, who was acting Attorney General in March 2004 when John Ashcroft was hospitalized for gall bladder surgery, refused to re-certify the legality of the National Security Agency’s electronic monitoring program, which threatened its cutoff.

After Comey refused to reauthorize the program, the White House chief of staff, Andrew Card, and then White House counsel and future Attorney General Alberto Gonzales made an emergency night-time visit to Ashcroft’s hospital room to obtain his signature on the certification documents.

In a dramatic encounter, recounted by Comey at a Senate hearing in 2007, Ashcroft feebly raised himself from his bed and rebuffed the two White House aides.

Comey, along with FBI Director Robert Mueller and several other Justice Department officials, had prepared to resign if the White House rejected their legal conclusions.

But they withdrew their planned resignations when Bush agreed to make changes in the surveillance program, whose existence was not publicly known until it was disclosed by the New York Times in December 2005.

Comey was also one of the few top officials to resist the Bush administration’s efforts to obtain legal sanction to use brutal interrogation techniques on terror suspects. He authored several e-mails in 2005 documenting his opposition on moral and ethical grounds to Justice Department legal opinions authorizing harsh techniques.

Comey, a former U.S. Attorney in the Southern District of New York who took over the deputy’s job in 2003, left the Justice Department to join Lockheed in 2005.