Attorney General Eric Holder said Friday he found it “intolerable” that  Arab and Muslim Americans feel uncomfortable about their relationship with law enforcement and asserted the Justice Department is working to strengthen the ties with those communities. 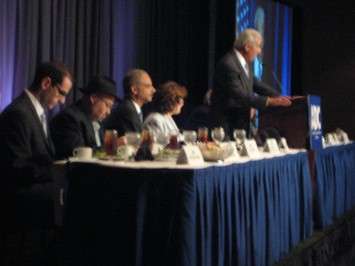 “Since becoming Attorney General last February, I have heard from Arab-Americans and Muslim Americans who say they feel uneasy about their relationship with the United States government.  I’ve spoken to Arab-Americans who feel that they have not been afforded the full rights – or, just as important, the full responsibilities – of their citizenship. They tell me that, too often, it feels like ‘us versus them’,” Holder said in prepared remarks.

“That is intolerable,” he continued. “And it is inconsistent with what America is all about. In this nation, our many faiths, origins and appearances must bind together, not break us apart.”

Holder addressed the American-Arab Anti-Discrimination Committee (ADC), one of the organizations that takes part in bi-monthly meetings hosted by the Justice Department’s Civil Rights Division. The meetings bring Muslim, Arab, Sikh and South Asian American leaders together with representatives of top federal agencies, a spokesman said.

Holder’s speech, at the 30th anniversary convention of the organization, came at a time when government officials have expressed heightened concern about the threat of home-grown terrorism inspired by Islamic extremism.

Those fears were underscored last week by White House counterterrorism adviser John Brennan. In remarks about the Obama administration’s new National Security Strategy last week, Brennan said there had been seven alleged incidents of home-grown terrorism in the past year.

The National Security Strategy (PDF) warned that “several recent incidences of violent extremists in the United States who are committed to fighting here and abroad have underscored the threat to the United States and our interests posed by individuals radicalized at home. Our best defenses against this threat are well informed and equipped families, local communities, and institutions,” the report said.

The Justice Department has tried to carefully cultivate its relationship with Arab and Muslim-American civil rights organizations as it pursues aggressive law enforcement strategies to prevent terrorist attacks which continue to leave some groups saying they feel singled out for scrutiny.

Holder addressed one issue of tension - the Justice Department’s Guidance Regarding the Use of Race by Federal Law Enforcement Agencies, which was issued in 2003. Holder noted that he had initiated an internal review of the guidance in the fall.

“I’m committed to ensuring that department policy allows us to perform our core law enforcement and national security responsibilities with legitimacy, accountability and transparency,” Holder said. “But, today, I want to be clear about something: Racial profiling is wrong. It can leave a lasting scar on communities and individuals. And it is, quite simply, bad policing—whatever city, whatever state.”

“The era of ‘us versus them’ that some of you have experienced must end. At long last, it is ending. Together, we can make sure it’s replaced by a new era – an era that recognizes the truth reflected in this organization’s name – that regardless of our faiths, regardless of our backgrounds, we are all Americans,” Holder said.

The Justice Department’s relationship with ADC is not new. They worked together throughout the Bush administration, though there were a handful of flair-ups. Several Bush administration Justice Department officials, including former Assistant Attorney General for Civil Rights Alexander Acosta have spoken to the group, as had former Attorney General Janet Reno.