The Justice Department will put into action additional oversight of the Patriot Act, the Senate Judiciary Committee announced Wednesday. 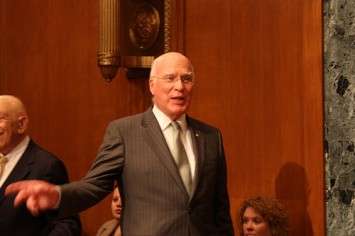 Panel Chairman Patrick Leahy (D-Vt.), who introduced Patriot Act renewal legislation last year, urged Attorney General Eric Holder in March to implement safeguards for the use of Patriot Act even though they are not required by law.

The Senate Judiciary approved the legislation in October that would reauthorize the “lone wolf,” business records and “roving wiretap” powers in the Patriot Act and require additional civil liberties and oversight protections for four years.

The full Senate has yet to vote on the bill. The House Judiciary Committee also approved a Patriot Act extension bill that has since stalled on the House floor. The House bill includes the civil liberties and oversight protections, but the legislation would only renew the records and “roving wiretap” authorities.

The House and Senate bills also call for more restrictions on the use of national security letters, which are used by the FBI to obtain evidence without a court order.

In the letter, Fine said the review would look into the use of national security letters and the business records provision of the Patriot Act, as well as other issues.

With the provisions set to expire at the end of 2009, Congress temporary extended the powers through Feb. 28, 2011, but did not include any of the proposed civil liberties and oversight provisions.

Here is a summary of the provisions:

“While the Senate has not acted on this legislation, it is clear that the Attorney General and Inspector General Fine are committed to responding to congressional oversight requests about the use of these national security authorities.  I appreciate Inspector General Fine’s responsiveness to this request, and I look forward to reviewing these reports when completed.”
RELATED POSTS:
OLDER POST
DOJ Launches Federal Pro Bono Program in New York
NEWER POST
Defendant Used Blackberry PIN Message to Avoid Feds