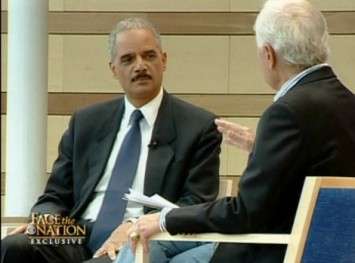 Attorney General Eric Holder defended his decision to announce a criminal probe in connection with the oil spill in the Gulf of Mexico, saying extraordinary circumstances warranted a break with normal practice.

“Given the extraordinary nature of what our nation is facing there, we thought it was appropriate to let the American people know that the federal government was understanding what was going on here, and that we were using the full panoply of our powers to open both a criminal investigation and a civil inquiry to ensure that the American people don’t pay a cent for the clean up,” Holder said in an interview broadcast Sunday on CBS’ “Face the Nation.”

Prosecutors are forbidden from acknowledging the existence of a criminal probe unless it has already received substantial publicity or doing so is necessary to protect public interest, according to the U.S. Attorneys’ Manual.

After Holder announced the probe last month, BP’s stock plummeted. Critics say Holder crossed the line, but he said his statements were misinterpreted.

Holder also pushed back against criticism that the Justice Department’s lawsuit challenging the Arizona immigration law was motivated by politics and left open the possibility of a second, racial-profiling lawsuit.

The department sued the state last week, arguing that the Arizona law is preempted by federal statutes.

“The basis for this was a legal determination by those of us at the Justice Department that the law was inconsistent with the Constitution. And there, I think one has to also understand that there are a substantial number of Republicans and people in law enforcement who thought that the decision that we made to file this lawsuit was, in fact, the correct one. So it is not a monolith,” Holder said.

Holder has expressed concern that the law, which allows police wide latitude to stop people suspected of being in the U.S. illegally, would drive a wedge between law enforcement and the community. But the lawsuit makes scant mention of racial profiling. Holder said the preemption argument was stronger but wouldn’t rule out another challenge.

“It doesn’t mean that if the law, for whatever reason, happened to go into effect that six months from now, a year from now, we might not look at the impact the law has had and whether or not- see whether or not there has been that racial profiling impact,” Holder said. “And if that was the case we would have the tools and we would bring suit on that basis.”

When asked about the closure of the Guantanamo Bay detention center, Holder revealed that “a couple” states had registered “expressions of interest” in housing detainees in facilities there. The Obama administration hopes to retrofit a jail in Illinois to hold Guantanamo inmates and has support from state officials, but Congress has withheld funding.

Holder said he still favored civilian trials for the suspected plotters of the Sept. 11 attacks, and he noted that there is some uncertainty over whether the government could seek the death penalty in a military tribunal if the detainees plead guilty.

Holder said the matter of where the detainees will be tried was still under review.

The full interview is embedded below.