The Justice Department is doling out millions of dollars to American Indian communities as part of a new initiative designed to streamline the distribution of law enforcement grants to tribes, a senior DOJ official announced Wednesday at the Smithsonian National Museum of the American Indian. 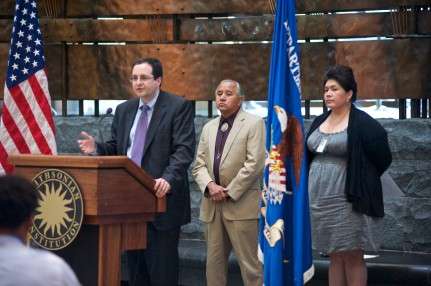 The Coordinated Tribal Assistance Solicitation draws on American Indian grant programs from the Office of Justice Programs, Office of Community Oriented Policing Services and the Office on Violence Against Women. Tribes interested in obtaining funds from the DOJ previously had to submit forms to the correlating grant offices, but now they can turn in one application for all their grant requests.

The DOJ under Attorney General Eric Holder has made American Indian issues a top priority. The department has hired more prosecutors to handle crimes on reservations and initiated several new plans and policies to help lower the high crime levels in Indian Country.

“[The Coordinated Tribal Assistance Solicitation] is part of the Department of Justice’s broader strategy of increased engagement with tribal communities across a broad range of areas,” Perrelli said. “CTAS encourages tribal nations to take a comprehensive look at the public safety challenges they’re facing and to work with the department to find ways to address them.”

"We plan to fully utilize the [Voting Rights Act’s] remaining sections to ensure that the voting rights of all American citizens are protected." -- Attorney General Eric Holder, speaking to the National Urban League.