The U.S. Commission on Civil Rights on Friday endorsed a disparaging report on the Justice Department’s management of a divisive voter-intimidation case against members of the New Black Panther Party.

The body voted 5-2 along ideological lines to approve the conservative-backed document, three weeks after a Democratic commissioner walked out of a previous meeting, preventing consideration of the report. Republican Vice Chairman Abigail Thernstrom, who has voiced concerns about the commission’s investigation, was not present.

Democratic Commissioner Michael Yaki, who walked out of the last meeting, said the commission’s investigation “is not legitimate” and “an irresponsible exercise.” He said the report is “blown out of proportion.”

“It really reads like a bad script for a ‘Men in Black’ sequel,” Yaki said. “It has conspiracy theories, whispers of left-wing cabals, sinister forces at work tampering with witnesses, innuendo and rumor.” 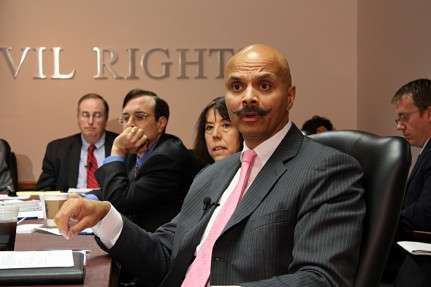 Republican Commissioner Peter Kirsanow conceded that the New Black Panther case alone “may not be the most important thing in the world.” But he said the commission’s probe was important. He noted that former DOJ staffer J. Christian Adams and Assistant U.S. Attorney Christopher Coates, the former chief of the Civil Rights Division Voting Section, testified before the commission that DOJ officials were opposed to opening voting rights cases against minorities.

“What drew the attention of this particular commission was [the New Black Panther case] appeared to be, and is now confirmed by these two witnesses to be, a manifestation of a policy and practice engaged in by the Department of Justice,” Kirsanow said.

Assistant Attorney General Thomas Perez said in a statement before the commission that the Civil Rights Division is “strongly committed” to enforcing voting rights laws, pushing back against commissioners’ criticism of  DOJ decisions in the case.

An earlier draft of the commission’s report says the DOJ did not fully cooperate with the probe, which focused on the government’s decision to throw out most charges against members of the anti-white fringe group who wore military clothing outside a polling place in a black Philadelphia neighborhood in November 2008. The version of the report approved by the commission also is critical of DOJ cooperation’s with the investigation, according to Republican and independent commissioners. The document will not become public for a few days.

The DOJ has voiced opposition to the earlier report’s allegations about the department’s responsiveness. DOJ spokeswoman Tracy Schmaler said last month that the department has handed over more than 4,000 documents about the case at the request of the commission.

The commission has spent more than $170,000 probing the DOJ’s handling of the New Black Panther Party case. Congressional Republicans have commended the panel’s investigation, and some conservative commissioners have supported continuing the probe.

In late October, the panel subpoenaed key DOJ officials who were  involved with the case. But the DOJ would not permit testimony from former acting Civil Rights Division Assistant Attorney General Loretta King, or division officials Julie Fernandes and Steve Rosenbaum, citing the commission’s conditions for the depositions. The DOJ also declined to comply with a subpoena for testimony from Deputy Associate Attorney General Sam Hirsch, who has ties to the case.