Congressional Republicans on Wednesday officially named Rep. Lamar Smith of Texas as the next chairman of the House Judiciary Committee, which has oversight of the Justice Department. 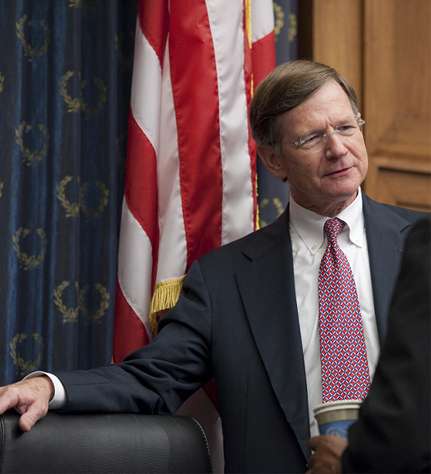 Smith, the panel’s top Republican for the past four years, will take the gavel held by Rep. John Conyers (D-Mich.) when a new Congress convenes in January. The appointment was expected after Republicans secured a majority in the House during last month’s election.

“The House Judiciary Committee is often referred to as the guardian of the Constitution,” Smith said in a statement. “We must protect the principles of liberty, equality and justice for all Americans.”

The chairman can subpoena DOJ officials. Smith, who has expressed numerous concerns about the DOJ under Attorney General Eric Holder, said in September that the most important benefit of a Republican majority in the House would probably be the authority to “issue subpoenas and find out what this administration has been doing that the American people don’t know.”

The Republican has expressed concern about several matters, including the DOJ’s handling of a controversial voter intimidation case involving members of the New Black Panther Party/ the reading of Miranda warnings to terrorism suspects and Holder’s now-withdrawn decision to try self-proclaimed Sept. 11 mastermind Khalid Sheikh Mohammed and alleged accomplices in a New York federal court. The Barack Obama administration is now considering the use of military commissions as an option for the prosecutions of those Guantanamo Bay detainees after Republicans and Democrats raised concerns about Holder’s initial proposal.

Smith and his Republican colleagues have increased their attacks on Holder’s support for using civilian courts to prosecute some terrorism suspects after a federal jury’s acquittal last month of Ahmed Khalfan Ghailani, a Guantanamo Bay detainee, on all but one count in the 1998 U.S. embassy bombings in Africa.

The House, which is still under Democratic control, on Wednesday endorsed legislation that would ban the Obama administration from prosecuting Guantanamo Bay detainees in civilian courts until Sept. 30. The provision was part of a must-pass continuing resolution to fund the government in the current fiscal year, since Congress has not passed regular appropriations bills.