Senate Majority Leader Harry Reid on Wednesday said he would like the Senate to vote on Deputy Attorney General nominee James Cole before the Senate adjourns this year. 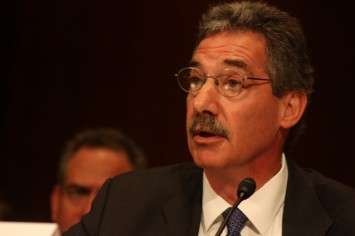 Reid said a senator is holding up the nomination for the No. 2 position at the Justice Department. The Democrat didn’t name the senator who is preventing the full Senate from considering the nominee. Read our previous reports on the stalled nomination here and here and here.

President Barack Obama nominated Cole on May 24. He was reported out of the Senate Judiciary Committee on July 20 with no Republican support.

“On nominations, the Republican leader knows the president is very, very concerned about having somebody at the Attorney General’s Office,” Reid said, according to The Blog of Legal Times. “We need somebody to be second-in-command, the deputy there. Mr. Cole has been [on the Senate calendar] a long time.”

Senate Judiciary Committee Chairman Patrick Leahy tried to move Cole’s nomination earlier this month. But Sen. Jeff Sessions of Alabama, the top Republican on the Judiciary panel, objected to a motion from the Democrat to consider nominee, keeping the nomination off the Senate floor.

Cole has had a tense relationship with Republicans over the years.

He was the House ethics committee special counsel who investigated then-Speaker Newt Gingrich (R-Ga.) in the 1990s for the misuse of tax-exempt organizations for political purposes. The House issued a rare formal reprimand against Gingrich and ordered him to pay a $300,000 penalty.

But Republicans have focused their attacks on Cole’s work as an independent monitor for insurance giant AIG, which the Federal Reserve bailed out during the 2008 financial industry crisis, and a 2002 article Cole wrote in support of civilian trials for terrorism suspects.

A former DOJ Criminal Division official, Cole said during his nomination hearing in June that he supports “use [of] all available means” in defense of national security. The nominee, a partner at the law firm of Bryan Cave LLP in D.C., said recent improvements in military commissions now make commissions a more viable option than in 2002.