Deputy Attorney General James Cole has tapped the former No. 2 official in the Maryland U.S. Attorney’s Office as his chief of staff. 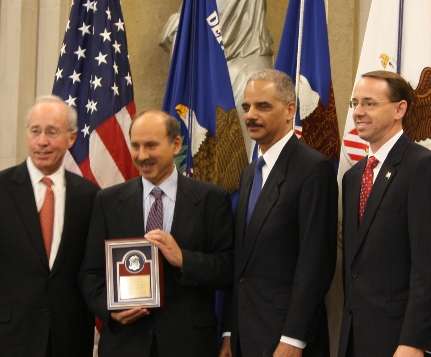 Stuart Goldberg, who was Maryland’s First Assistant U.S. Attorney from 2005 to 2010, was introduced to staff members in the Deputy Attorney General’s office as the chief of staff to Cole on Jan. 3. Cole was sworn in that day as the second highest-ranking official at the Justice Department through a recess appointment by President Barack Obama. Goldberg and Cole worked together in the DOJ Criminal Division Public Integrity Section during the late 1980s and early 1990s.

Maryland U.S. Attorney Rod Rosenstein announced on Tuesday that Stephen Schenning, a 19-year veteran of the Baltimore-based U.S. Attorney’s office, has succeeded Goldberg as First Assistant U.S. Attorney. He previously held that post from 1997 to 2001.

Rosenstein on Monday praised Goldberg for his service to the U.S. Attorney’s office, noting that the DOJ lawyer received an award at the 2010 Executive Office for United States Attorneys Director’s Awards Ceremony. The executive office honored Goldberg for his efforts to strengthen the Maryland office’s relationships with state and local law enforcement agencies, improve his office’s reputation and boost office morale.

“When you consult Stuart Goldberg, you know the advice you get will be straight, wise and nonpartisan,” said Rosenstein, whom President George W. Bush appointed in 2005. “He has superb judgment, outstanding legal skills and extensive managerial experience.”

Goldberg joined the DOJ in 1988, after a six-year stint as a civil litigator at Rogers & Wells LLP, which merged with London-based Clifford Chance LLP in 2000.

He has taught professional responsibility as an adjunct professor at Georgetown University Law Center and public corruption and other criminal matters at the DOJ’s National Advocacy Center.

Goldberg received his undergraduate degree from the University of Virginia in 1979. Harvard University awarded him his law degree in 1982.