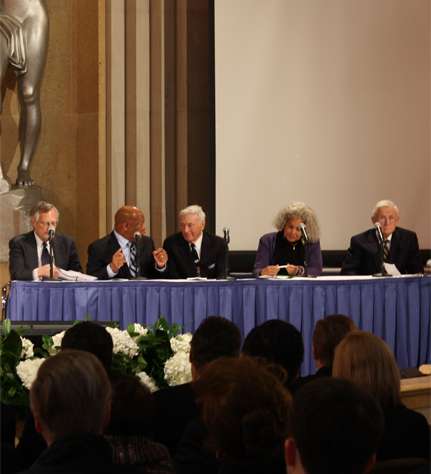 The common theme throughout the panel discussion on Friday commemorating the 50th anniversary of the beginning of Robert F. Kennedy’s time as attorney general was his dedication to ensuring civil rights.

The group shared their memories of Kennedy with a huge audience, including members of the Kennedy family, at the Great Hall in the Department of Justice. A portrait of a youthful Kennedy wearing a gray jacket with his hands jammed in his khakis and his red leather high-backed chair stood prominently on stage reminding guests of his lasting imprint at DOJ — and making it hard to believe that he would be 85 years old if he were still alive.

The four panelists included a veteran civil rights activist, Rep. John Lewis (D-Ga.); an administrative assistant to Attorney General Kennedy and journalist, John Seigenthaler; the first African-American woman to enter the University of Georgia and journalist, Charlayne Hunter-Gault, and the First Assistant and then the Assistant Attorney General of the Civil Rights Division from 1960 to 1967, John Doar. The moderator was Jack Rosenthal, a public affairs officer and special assistant to Kennedy and a Pulitzer Prize-winning journalist for The New York Times.

Elected to the House of Representatives in 1986, Lewis recalled his tumultuous experience as a freedom rider in the 1960s. The activists planned to travel from Washington, D.C.,  to New Orleans. But they were stalled in Montgomery, Ala. and subjected to beatings and violence. Kennedy intervened and threatened federal intervention if a Greyhound bus driver did not drive the group so their journey could go on.

“It was the first real test in the area of civil rights,” Lewis said. “Robert Kennedy used his power, used his ability to save lives that evening in Montgomery.” Lewis knew well the dangers faced by civil rights activists: he was clubbed on the head by Alabama state troopers in1965.

Seigenthaler called that era an exciting time to be able “to  listen to the work of justice unfold by these giants of justice.”

Hunter-Gault witnessed Kennedy’s first major speech as Attorney General. She freely admitted her anxieties and uneasiness anticipating his speech, for she was still smarting from her peers’ racist taunts protesting her admittance to the University of Georgia.

Her fears started to ease once she heard Kennedy speak to the universality of equal rights. “I suddenly heard Kennedy say in the worldwide struggle, the graduation of Charlayne Hunter in Hamilton homes will without a question aid and assist the fight against communism, political infiltration and the global warfare. And I said my graduation is going to do what?”

Doar, who was one of the central figures at DOJ, dedicating himself to getting rid of Jim Crow laws and helping draft the Voting Rights Act of 1965, emphasized Kennedy’s involvement with civil rights advancements.

He recalled Kennedy’s drive, his ability to get attorneys to work with him, his generosity and sense of humor. Kennedy would say, “‘You’ve got to do more; what are you going to do about Mississippi?’ That’s not good enough,’” Doar said.

The day had a decidedly celebratory tone, with the current attorney general, Eric Holder, the first black man to hold the post, and Kennedy’s eldest daughter, Kathleen Kennedy Townsend, offering remarks and Kennedy’s widow, Ethel, joining them on stage. But it was marked with solemn reverence for the man to whom the day was dedicated.

Both Doar and Lewis easily associated Kennedy’s legacy with the Voting Rights Act of 1965. “Without 1965, there would be no [President] Barack Obama as president of the United States of America,” Lewis said.