As Congress struggles to slash the deficit - with conservative lawmakers demanding immediate cuts of up to $100 billion from the government’s discretionary spending  - the Barack Obama administration is asking for a 2 percent increase for the Department of Justice over the levels in a 2011 continuing resolution. If approved, the increase would bring 2,905 new DOJ positions.

For national securities matters, the fiscal 2012 budget request allocates about $1.25 billion, a 10 percent increase from the funding in the fiscal 2011 continuing resolution. A majority of any new resources are slated for the FBI, with a focus on combating cyber intrusions and improving surveillance capabilities. Funding for the National Security Division itself, however, would stay essentially flat at around $87.9 million.

The administration would continue its strong emphasis on crime in American Indian communities. The budget asks for $424.4 million for Indian Country public safety initiatives, a 29 percent increase from the fiscal 2011 continuing resolution. A significant amount of the funds would go toward public safety grants for tribal programs and additional FBI agents for tribal matters. The popular Community Oriented Policing Services (COPS) program budget includes $42 million to hire law enforcement officers for tribal communities.

DOJ asks in the proposed budget for $283.4 million to combat health care fraud, a 22 percent increase from the fiscal 2011 continuing resolution. In fiscal 2010, the DOJ handled more than 2,000 criminal and civil health care fraud investigations and recovered $4 billion from individuals who tried to defraud Medicare and Medicaid.

The budget proposal also includes $6.8 billion for the Bureau of Prisons, increasing the agency’s funding from the fiscal 2011 continuing resolution by 10 percent. The DOJ would use most of the extra resources to hire more prison personnel and activate prisons for use, including a Thomson, Ill., correctional facility slated for Guantanamo Bay detainees.

But, according to a Main Justice analysis of DOJ accounts listed in the budget request, the biggest increase in percentage terms is for witness fees and expenses. The budget proposal has $270 million for the account, a 60 percent increase from the fiscal 2011 continuing resolution.

The DOJ previously asked for $270 million in its fiscal 2011 budget proposal to pay for witness fees and expenses. The overall funding has been at about $168 million since 2006, with DOJ using carry-over balances and direct appropriations to cover rising costs. The carry-over balances, which fund a large amount of the expert witness expenses, are “no longer sufficient to sustain current activity,” according to the DOJ Budget and Performance Summary for fiscal 2012.

The budget also requests $1.3 billion in non-discretionary funds for the Assets Forfeiture Fund, a 15 percent increase from the fiscal 2011 continuing resolution and the second biggest in percentage terms, according to the Main Justice analysis of DOJ accounts. In fiscal 2010, U.S. Attorneys brought in $6.7 billion from actions in civil and criminal cases, setting a record for the largest financial collection in DOJ history.

But the DOJ proposed budget also includes some cuts.

In the budget request, the funding for law enforcement wireless communication is cut to $102.8 million, a 50 percent decrease and the biggest in percentage terms from the fiscal 2011 continuing resolution, according to the Main Justice analysis of DOJ accounts. The reduction would put a hold on new development for the communication tools used by the DOJ law enforcement agencies, according to the DOJ.

The proposed budget also asks to reduce the funding for the National Drug Intelligence Center to $25 million, a 43 percent decrease and the second largest in percentage terms from the fiscal 2011 continuing resolution, according to the Main Justice analysis of DOJ accounts. The cuts target administrative and management expenses at the clearinghouse for domestic drug intelligence and are intended to focus the center’s efforts on fulfilling document and computer exploitation requests in significant law enforcement operations and probes, according to the DOJ.

In the budget request, Justice Information Sharing Technology gets $88.2 million, a 39 percent decrease and the third largest in percentage terms from the fiscal 2011 continuing resolution, according to the Main Justice analysis of DOJ accounts. The reductions for the account, which funds DOJ systems that electronically store and transmit data, are intended to make it more efficient and increase its focus on critical needs, according to the DOJ. In the fiscal 2011 budget request, the DOJ looked to double the funding for the account.

The DOJ also is looking to cut funding for grants to state, local and tribal law enforcement and safety programs to $3 billion, a 16 percent decrease from the fiscal 2011 continuing resolution. The cut would scrap grant earmarks from members of Congress and reduce funding for the State Criminal Alien Assistance Program, which gives money to state and local governments that incarcerate criminal aliens.

The Drug Enforcement Administration’s Mobile Enforcement Teams are also on the chopping block in the proposed budget. The elimination of the teams that help local law enforcement agencies with drug investigations would save the DOJ $39.1 million.

The popular Community Oriented Policing Services (COPS) program is slated for a 14.4 percent reduction, to $709.8 million. However, much of the COPS budget is slated to be transfered to other DOJ programs, while funding for officers on the street is protected.

Cole said the cuts were made in an effort to create a “fiscally responsible” budget.

“I think you need to understand that we had to make some tough choices in order to enhance certain of our essential functions that we at the Department have to maintain,” Cole said. “But we did so in a way that doesn’t sacrifice our investment in the future, and it’s an investment that we are confident can provide further deficit reductions in the future as we achieve some of these programs.” 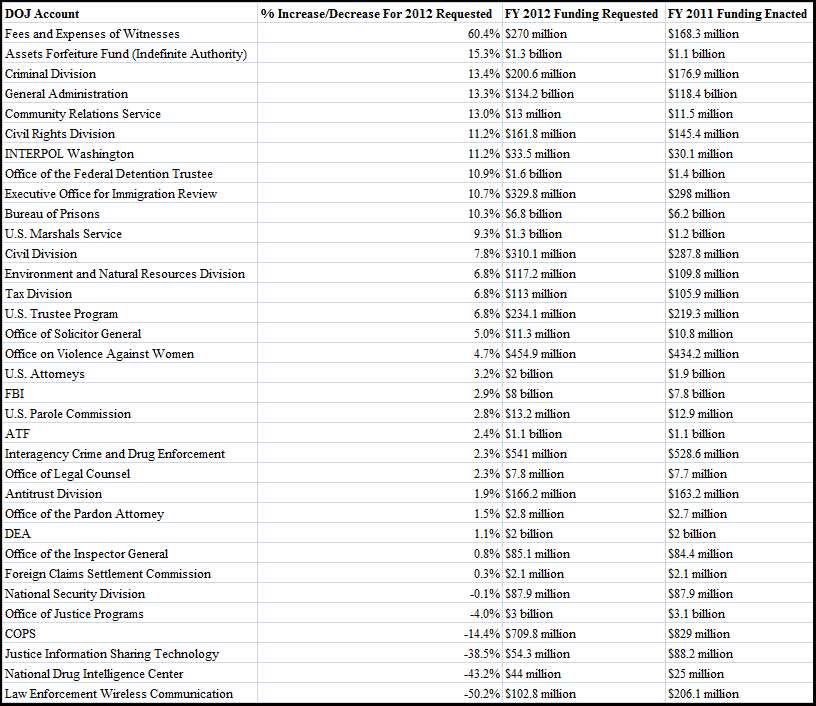 "[T]here is a very regrettably small number of white Mississippians who support the president. We cannot expect, in all fairness, for our state to get any kind of priority in attention of the White House." -- Brad Pigott, former U.S. Attorney for the Southern District of Mississippi on the slow pace of federal nominations in his home state.