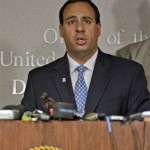 Two U.S. Attorneys from the George W. Bush administration are at opposite ends of a legal quarrel over control of a glass-bottomed walkway that stretches out over the edge of the Grand Canyon, The Arizona Republic reported Thursday.

Charlton, who was one of nine U.S. Attorneys ousted during the firing scandal, served from 2001 to 2007. He is currently a shareholder at the law firm of Gallagher & Kennedy PA in Phoenix.

Eid, who was U.S. Attorney from 2006 to 2009, is a shareholder at the law firm of Greenberg Traurig LLP in Denver.