Pelletier, 53, was  recruited to Fraud in 2002 from the Miami U.S. Attorney’s Office. He spent nine years as the Fraud Section’s chief deputy and acting chief. He will jump to the Washington office of Boston-based Mintz Levin Cohn Ferris Glovsky and Popeo P.C., where he will help expand the firm’s white collar defense practice. 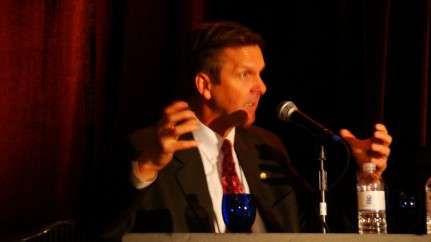 Widely given the lion’s share of the credit for transforming Fraud from a sleepy unit to a swift-moving and successful section, Pelletier recruited and trained dozens of Fraud  attorneys to try complex financial fraud, health care fraud, insider trading and foreign bribery cases. He’s frequently referred to as “the heart and soul of the section.” Main Justice will explore Pelletier’s tenure at Fraud in more depth next week.

Current Fraud Section Chief Denis McInerney said Pelletier has been the “backbone” of the section since his arrival nine years ago, and leaves behind an “indelible” imprint. Former Fraud Chief Steve Tyrrell, now a partner at Weil Gotschal & Manges LLP, said Pelletier was a “team player” who both “advanced Fraud’s mission and improved its reputation.”  Joshua Hochberg, who spent seven years as fraud section chief before joining McKenna Long & Aldridge LLP in Washington in 2005, lured Pelletier from Miami. He said on his watch, Pelletier “inspired young lawyers not to be afraid..”

Pelletier did his mentoring with a sense of humor. At his first encounter with budding star Leo Wise in July 2005, Wise remembers Pelletier, who graduated from Providence College and New England School of Law, poking fun at the aspiring prosecutor’s blue chip resume-Harvard Law, DOJ honors program.

“I think the first thing he ever said to me-because Paul had graduated from a Massachusetts law school-was, ‘Not a lot of great prosecutors come out of Harvard Law,’” said Wise, now an AUSA in Maryland, who counts Pelletier as a key mentor.  “I’d always wanted to be a prosecutor, but there, I was a fish out of water because 93 percent intend to go to big law firms. ”

From his earliest days at Fraud investigating the Enron scandal, Pelletier proved to local U.S. Attorney’s Offices, the FBI and myriad federal agencies that the Fraud team could  parachute in and help them tackle complex cases.

With help from key deputies plucked out of private practice, he redefined the way healthcare fraud is prosecuted, initiating a whole series of  prosecutions that have saved upwards of $7 billion.

His eye for spotting talent had a lot to do with the section’s success. Current and former health care fraud deputies Hank Walther and his immediate predecessor Kirk Ogrosky, left private practice in 2006. Ogrosky, who jumped to Arnold & Porter LLP last March, had once been an assistant U.S. attorney in Miami — although Pelletier plucked him out of the Washington office of New York-based Skadden, Arps, Slate, Meagher & Flom LLP. Walther came out of DLA Piper LLP, where he was defending pharmaceutical companies.

“At the Fraud Section, Pelletier created an atmosphere that was truly infectious,” Ogrosky said.  “He recruited a large crop of talented attorneys over the years.  His ability to find talent was remarkable.  Pelletier was never impressed by high-end credentials, he wanted to know what people had done in their lives and what they had overcome to succeed.  When Pelletier said an attorney ‘gets it,’ it meant that the attorney had the judgment and ability to succeed.  But his recruiting was just the first step because he was the consummate mentor providing guidance at every step.  At the Fraud Section, Pelletier encouraged us to think big, move quickly and have a positive impact.”

“Pelletier’s absence is a big leadership loss for DOJ,” Ogrosky said.  “His contagious enthusiasm for the law and his skills as a mentor created an atmosphere that made the Fraud Section a truly special place.  In over a decade that I’ve worked with Pelletier, he has never given the impression that he worked at a job — it was always a passion that he enjoyed. “

Pelletier is the last criminal fraud deputy to leave after Assistant Attorney General Lanny Breuer announced leadership changes in the section in 2009.

McInerney, who came in to head the section in early 2010  is a former litigation partner at Davis Polk & Wardwell LLP. He replenished management ranks, naming Walther to succeed Ogrosky and Duross to succeed Mendelsohn, and making Stokes and Kathleen McGovern co-deputy chiefs for corporate and securities fraud.