Attorney General Eric Holder offered a vigorous defense of the Department of Justice on Thursday, condemning “inflammatory and inappropriate rhetoric” and “politically motivated ‘gotcha’ games”  that he said threaten to obscure the “historic progress” the DOJ’s 117,000 employees have achieved on the law-enforcement front.

Appearing before the House Judiciary Committee — some of whose Republican members were skeptical and even hostile — Holder acknowledged the failures of the gun-tracking operation known as Fast and Furious and said that its failed tactics must never be repeated. He acknowledged, too, that some information conveyed to Congress about it has been inaccurate — but he heatedly rejected any suggestions that anyone in the DOJ has intentionally misled lawmakers.

“As I have repeatedly stated, allowing guns to ‘walk’ – whether in this Administration or in the prior one – is wholly unacceptable,” Holder said, alluding to a previous “gun-walking” operation under the DOJ of President George W. Bush.  ” The use of this misguided tactic is inexcusable.   It must never happen again.

But he rejected suggestions that he or anyone else in his vast agency has been deliberately deceptive. “Justice Department employees have been working tirelessly to identify, locate, and provide relevant information to this Committee and the two other committees investigating Fast and Furious – all while preserving the integrity of ongoing criminal investigations and prosecutions,” Holder told the judiciary panel.

Holder’s reception at the hearing, which was officially a general DOJ oversight session but was dominated by the Fast and Furious controversy, was a bizarre blend of courtesy and hostility.

Rep. Lamar Smith (R-Texas), the panel’s chairman, said at the outset that he was pleased to welcome the Attorney General and appreciated his appearance — then assailed Holder for running what he called “a closed and secretive Justice Department” that has been less than candid with Congress not only about Fast and Furious but about the role Elena Kagan played in defending President Barack Obama’s health-care legislation while she was Solicitor General and just before she became a Supreme Court justice.

Smith said he is still not satisfied with the DOJ’s answers about “who knew what and when” about Fast and Furious, in which straw buyers were allowed to buy hundreds of guns so that the Bureau of Alcohol, Tobacco, Firearms and Explosives could track them across the U.S.-Mexican border, helping law enforcement root out Mexican gangsters. 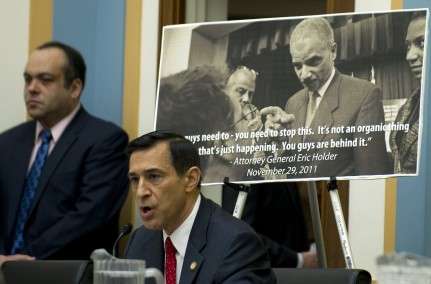 The poster behind Rep. Darrell Issa (R-Calif.)was an enlarged version of the Daily Caller, in which Holder scolded a reporter from the conservative website for its drumbeat of stories about lawmakers urging his resignation.

In what is now conceded to be a terrible failure, the ATF lost track of hundreds of guns — two of which were found at the scene of a border shootout last December in which Border Patrol agent Brian Terry was slain. “It’s been a year since the death of Agent Terry,” Smith said.  “Yet, many questions remain as to how such a reckless and dangerous law enforcement program was allowed to operate under the Justice Department.”

Two other Republicans on the panel, Reps. Darrell Issa of California and F. James Sensenbrenner Jr. of Wisconsin, seemed to go out of their way to be combative toward the Attorney General, with Sensenbrenner floating vague threats about impeachment, without saying exactly who should be in the crosshairs.

Issa said the House Committee on Oversight and Government Reform, which he chairs, had been “systematically lied to” over Fast and Furious by a DOJ that seems “more interested in data bases” than in actually tracking guns and drugs.

“This program was failed and flawed from the beginning,” Issa said. “Brian Terry is dead, in my opinion, because of this failed program.” And that, Issa said, is “reprehensible.”

“Mr. Attorney General,” Issa said, “the blame must go to your desk.” Why, Issa said, haven’t people been fired over the debacle? While Issa did not specify any names, an obvious target would be Assistant Attorney General Lanny A. Breuer, head of the Criminal Division, around whom the Fast and Furious storm has swirled. Breuer has also been at the center of ambiguities and misinformation that have been conveyed to Congress about Fast and Furious — missteps that Holder has insisted resulted from misunderstandings, not attempts to deceive.

Issa even made a point at the beginning of wanting the Attorney General put under oath, a formality that Smith said could be dispensed with, since someone appearing before Congress is legally bound to tell the truth.

Later, Issa said he wanted to hear more from Holder before his committee and asked him whether he needed to subpoena him. Holder said he would consider any request.

Sensenbrenner, too, was hostile. “Some heads should roll,” he said, wondering aloud “what’s the difference between lying and misleading Congress?”

At one point, Sensenbrenner used language that seemed extraordinary in the context of an exchange with the head of the Justice Department: “I don’t want to say that you have committed a felony, Mr. Attorney General.”

Asserting that “the American people need the truth” and haven’t heard it, Sensenbrenner said there is a remedy: “It’s called impeachment.” But he did not specify who should be the target.

Panel Democrats defended Holder. The ranking Democrat, Rep. John Conyers of Michigan, said Holder deserves credit for helping to forge a partnership with Mexican law enforcement in a bloody and costly battle against drug-trafficking. And Rep. Howard L. Berman of California said some rhetoric hurled at Holder and the DOJ was “quite unbelievably overblown.”

Holder himself remained calm throughout, as when he was asked by Berman if Congress was doing enough to help the DOJ.

“Frankly, no,” Holder said evenly. Among the things Congress should do, he said, is increase funding for ATF teams battling violence along the Southwestern border.

"Quite frankly, I have been an agent of change and change is hard sometimes for individuals to deal with." -- acting ATF chief B. Todd Jones.