The Department of Justice’s prosecution of Sen. Ted Stevens of Alaska, the longest-serving Republican senator and once one of Washington’s most powerful figures, was marked not just by management failures but by “astonishing”  and “extraordinary” lapses, including the willful concealment of facts and evidence that would have greatly helped the defense, according to an investigative report released Thursday.

The prosecutors knew, but did not tell the defense, that an oil services tycoon at the heart of the public corruption case, Bill Allen, had earlier tried to suborn perjury by inducing a teen-age prostitute to conceal their relationship. Had defense lawyers known that information during Stevens’ trial, they might have used it to fatally undermine the testimony of Allen, the  star witness against Stevens, according to Henry F. Schuelke III, the leader of the outside inquiry.

The Alaska senator had been accused of concealing favors and gifts from Allen worth more than $250,000. His 2008 conviction was vacated and the charges dismissed in 2009 after the Justice Department conceded it had failed to hand over potentially exculpatory information to the defense, in violation of the Supreme Court’s Brady decision. Schuelke concluded that Joseph Bottini and James Goeke, both Alaska Assistant U.S. Attorneys at the time, “intentionally withheld and concealed significant exculpatory information” from the defense in three instances in the prosecution.

What’s more, the Schuelke report found, prosecutors had reason to believe that the actual value of gifts bestowed on Stevens might have been closer to $80,000 rather than the $250,000 figure often bandied about. Indeed, Stevens had an argument that the “gifts,” largely in renovations to a home he owned in Alaska, were not so much gifts as work that he was willing to pay for, Schuelke concluded. 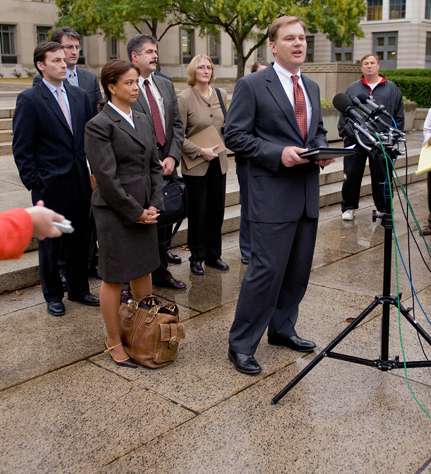 Schuelke concluded, as had the trial judge before him, that the prosecution was marred by “systematic concealment of significant exculpatory evidence” in contravention of Supreme Court decisions protecting the rights of defendants, and, for that matter, by the lack of competent professional lawyering. Schuelke, a former Assistant United States Attorney for the District of Columbia, used terms like “astonishing” and “strains credulity” in describing the government’s failures in a damning report of more than 500 pages.

The Stevens case was hobbled when Matthew Friedrich, then the acting Assistant Attorney General for the Criminal Division, very late in the game installed Brenda Morris, principal deputy chief of DOJ’s Public Integrity Section, as lead prosecutor. The subsequent reshuffling demoted Nicholas A. Marsh, another Public Integrity lawyer, from first chair to the third-ranking member of the prosecution team, and booted Public Integrity Section lawyer Edward Sullivan completely from the team, relating him and Goeke to supporting back-office work. Bottini remained on the team in the second-chair role.

The reshuffling stirred resentment among lawyers who had worked on the Alaska investigation for years, thrust Morris into a star turn for which she wasn’t prepared, subverted the chain of command and left confusion about who was in charge. (There will be more to come from Main Justice on this angle later today)

Morris, the report said, tried to counter this resentment by keeping a low profile — thus abrogating the management and supervisory role vital to case-preparation. Her lawyer, Chuck Rosenberg, noted on Thursday that the Schuelke report, whose release she welcomed, concluded that she had not engaged in misconduct.

“Brenda is a woman of tremendous integrity and an exceptionally talented prosecutor - she was fully honest with the investigators and always hoped that one day this report would be made public so that the facts of her individual role would be known,” Rosenberg said.

Additional submissions to the report from Sullivan and Welch both state that the prosecutors received letters clearing them of any misconduct from the Justice Department’s Office of Professional Responsibility. A separate Office of Professional Responsibility report concerning the prosecution team’s conduct in the Stevens case has not yet been finalized.

Brendan V. Sullivan Jr., a lawyer for Stevens, said the report “confirms that the prosecution of Senator Ted Stevens was riddled with government corruption involving multiple federal prosecutors and at least one F.B.I. agent.”

“Some were more knowledgeable, and thus more culpable, than others,” Sullivan said, according to The New York Times. “Nonetheless, they worked together to win at all costs in an attempt to convict a sitting United States senator in an ill-conceived prosecution.”

Bottini’s lawyer, Ken Wainstein, sent a letter to Attorney General Eric Holder today, highlighting what he and his client believe are “mischaracterizations” in the report.

“A good man’s human errors have been miscast as intentional criminal misconduct,” Wainstein said in a statement. “Despite the mischaracterizations in today’s report, Joe is a man of honor and integrity who has devoted his entire career to serving these principles and the Department of Justice and its mission.”

Several of the prosecutors who came in for harsh criticism offered rebuttals, contending that higher-ups at DOJ were left unscathed while underlings were put in position to take the fall over the Stevens debacle, which has deeply embarrassed the DOJ.

One of the saddest aspects of the report concerns Marsh, a prosecutor who was found to have committed misconduct. He took his own life in 2010 as the accusations against him were becoming known. On Thursday, his lawyer, Robert Luskin, asserted in a long “Dear Hank” letter to Schuelke that, contrary to any other suggestions, Marsh had always acted in good faith. Schuelke said that, because Marsh had “passed away,” he was making no official conclusion about Marsh’s conduct.

The weeks leading up to the Schuelke report’s release have inflicted one fresh embarrassment after another upon the DOJ, with senators from both parties demanding that Attorney General Eric Holder release the results of a separate, internal Office of Professional Responsibility investigation into the affair (see Main Justice’s report).

Last month, Judge Emmet G. Sullivan, who presided over the trial of then-senator in U.S. District Court in Washington, denounced the DOJ’s attempts to keep Schuelke’s findings from the public. Sullivan had commissioned the report in 2009, declaring that he didn’t trust the Justice Department to investigate itself.

What’s more, the cost to the DOJ of defending its own prosecutors from misconduct accusations was approaching $2 million, as Main Justice reported.

The Ted Stevens case once seemed to be a high mark for the Justice Department, as prosecutors zeroed in on one of the most powerful figures in the Senate, a man used to swaggering in the corridors of Congress and bringing home lots of federal largess to his home state.  Prosecutors obtained an indictment against Stevens in 2008, on charges that he concealed gifts from the oil services tycoon Allen and other friends. The senator was convicted and lost his seat in the 2008 election, a fate that would have been unthinkable not long before.

But problems about the government’s handling of the case kept cropping up.

It became apparent that prosecutors had withheld crucial evidence from defense lawyers, a cardinal sin in the world of criminal law. Nor could the transgressions be explained away as honest mistakes, or as not really consequential. They were serious enough that Holder moved to have the charges against Stevens dismissed in 2009.

Ted Stevens died in a plane crash in Alaska in 2010, but the case did not die with him.  Ben Stevens, a Republican like his father and former president of the Alaska State Senate, was under scrutiny for a time for accepting “consulting” fees from Allen’s oil company, although charges were never brought (see Main Justice’s account). Other Alaska state lawmakers either pleaded guilty or were convicted.

The in-state cases did not paint an edifying portrait of Alaska politics just as, arguably, the Ted Stevens trial in Washington did not paint a flattering personal portrait of the lawmaker. But, as in the centerpiece case against Ted Stevens, there were problems as it was disclosed that prosecutors did not always share the evidence they were obligated to share with the defense. One defendant whose case was tossed out on appeal was that of Pete Kott, a Republican who was once Alaska House Speaker.

The entire episode, stretching from Washington to Juneau, even had elements of sex. Did the DOJ give a pass to Allen, who came under suspicion of transporting a young prostitute across state lines? An indignant Sen. Lisa Murkowski, a Republican who is now Alaska’s senior senator, suggested publicly that perhaps the DOJ was reluctant to prosecute because it needed Allen’s testimony against Ted Stevens (see Main Justice’s report).

No, Attorney General Eric Holder has insisted. The decision not to prosecute Allen was based on several factors, none of them political, all of them having to do with the prospects of obtaining a conviction on sex-related charges.   In 2009, Allen, who was then 72, pleaded guilty to several charges involving his relationship with Ted Stevens and was sentenced to three years in prison (see Main Justice’s account). But the bad odor concerning Allen’s conduct, like so much else about the Stevens affair, has never entirely gone away.