Contempt Deadline Set, But Votes Not a Lock

While a deadline has been set to introduce a contempt of Congress citation for the Attorney General, reports indicate that GOP leadership might not have the support it needs to pass.

If Attorney General Eric Holder does not hand over the additional Operation Fast and Furious documents under subpoena by the House Oversight Committee by mid-June, Rep. Darrell Issa (R-Calif.) will move ahead with the contempt order, according to a report [1] in Politico. Several congressional aides told Politico that if the Justice Department sends some but not all documents requested, GOP lawmakers will send a “contempt referral” to the department. That action, however, would not likely bring forth “prosecutorial action,” Politico reported. 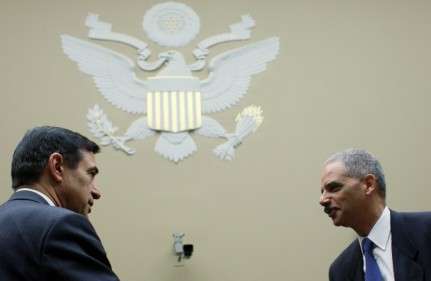 But the success of this plan depends on Issa and GOP leadership securing a majority vote in the House Oversight Committee, the congressional entity that has spearheaded the inquiry of the botched gun-tracing operation. The votes are certainly not a lock, according to a report [3] in The Hill. Issa needs to secure 21 votes within his committee for the contempt measure to pass and then move to the full House. Presently, 15 committee Republicans have publicly supported the contentious contempt measure. Two Republicans have declined to comment on their positions and another six did not respond to information requests at all, according to The Hill report. Unsurprisingly, no Democrats have publicly signed on to the measure.

Among the Republicans to remain mum on their position is Rep. Patrick Meehan (R-Pa.), the former U.S. Attorney for the Eastern District of Pennsylvania. He is joined by Todd Platts (R-Pa.), Mike Turner (R-Ohio), Connie Mack (R-Fla.), Tim Walberg (R-Mich.) and Dennis Ross (R-Fla.).

A draft of the contempt resolution was circulated [4] earlier this month, sparking controversy in the already fiery issue. Last week, House Speaker John Boehner (R-Ohio), Majority Leader Eric Cantor (R-Va.) and Majority Whip Kevin McCarthy (R-Calif.) joined Issa in sending Holder a letter demanding compliance with the subpoena. The letter, however, stopped short [5] of threatening contempt. Deputy Attorney James Cole wrote Issa to say bringing contempt charges would be “unwarranted” and “ill advised.” Cole argued that the department has not provided certain Fast and Furious documents because their release could damage [6] the integrity of ongoing investigations.

Fast and Furious was a gun-walking operation headed by the Bureau of Alcohol, Tobacco, Firearms and Explosives. Agents allowed 2,000-some guns to be purchased by straw buyers in the United States in an attempt to track any guns then trafficked into Mexico. But the ATF lost track of hundreds of guns during the course of the investigation, and two were found at the scene of a shootout between Mexican bandits and U.S. Border Patrol agents in December 2010. Agent Brian A. Terry was killed in the gunfire.