Hammond was appointed as Deputy Assistant Attorney General for Criminal Enforcement in January 2005, where he supervised the Antitrust Division’s domestic and international criminal investigations and prosecutions. He was also responsible for reviewing requests for amnesty under the division’s Corporate and Individual Leniency Program.

“Scott has served the Department of Justice’s Antitrust Division with distinction and integrity.  For over 25 years, he combated domestic and international illegal cartel behavior and promoted competition to the great benefit of American consumers,” Antitrust Division Assistant Attorney General William Baer said in a statement.

“As Deputy Assistant Attorney General for Criminal Enforcement, Scott led the effort to uncover and prosecute anticompetitive conduct in important industries, including LCD panels, air transportation, auto parts, real estate foreclosure auctions, municipal bonds, construction, chemicals and coastal freight,” Baer said. “In the last 10 years alone, these various investigations and others have resulted in convictions of 196 companies and 381 individuals with more than $5.9 billion in criminal fines and significant prison sentences for culpable executives.”

Hammond has not announced his plans for the future but will certainly be in demand with private sector law firms if he chooses to go that route. 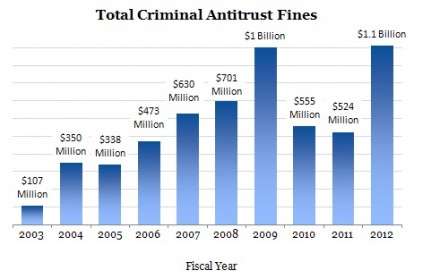 The United States in the last 20 years has been a leader in an expanded movement of international cooperation against cartels, the secret price-fixing groups that collude to raise prices for commodities and other basic components of industry in violation of open competition laws.

The success hinges on what Hammond has described as a “carrot and stick” approach: a leniency program that rewards cartel members who blow the whistle on illegal price-fixing with assurances they won’t be criminally prosecuted, and the threat of prison time and high fines for those executives who don’t squeal.

“The dynamic literally creates a race to be the first to the prosecutor’s office,” Hammond said in a 2010 speech.

The leniency program was introduced in 1978, but wasn’t initially effective. It was revised in 1993 and 1994 to enhance the “carrot and stick” approach and create clear incentives to cooperate with law enforcement. As a result, the Antitrust Division saw a nearly 24-fold increase in leniency applications. From fiscal year 2003 through fiscal year 2012, the department collected more than $6 billion in criminal antitrust fines.

The success of the program in the U.S. led to other jurisdictions adopting similar programs, most notably the European Union, which has been a close partner with the United States in battling cartels. The EU has the ability to level enormous fines, but can’t threatened executives with prison. Working in concert - with the threat of criminal prosecution in the U.S. and very large fines in the EU - international cartel enforcement has blossomed over the last two decades.

A long-running investigation of price-fixing of liquid crystal display (LCD) manufacturers resulted in convictions of eight companies and criminal fines of $1.39 billion. All together, 22 executives have been charged. As of last year, 12 executives had been convicted and sentenced to serve a combined total of 4,871 days in prison, according to the Department of Justice.

In 2012, the U.S. charged nine companies and 12 executives in the international auto parts industry with price-fixing and bid rigging.  Criminal fines for the mostly Japanese companies amounted to more than $809 million —including a $470 million fine for a single company.

Said Baer: “Under his leadership, international cooperation has been enhanced and the division’s criminal enforcement program has become a model in the international community.  On behalf of the Antitrust Division and the entire department, I thank Scott and wish him all the best as he embarks on his new career path.”