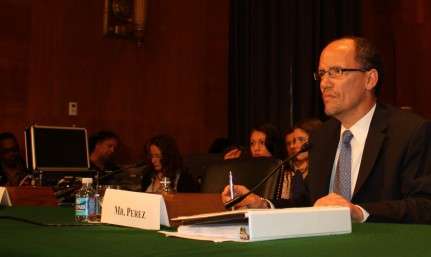 Other GOP senators, including Sen. Charles Grassley (R-Iowa), haveÂ criticized Perezâs involvement in a deal in which the Justice Department agreed to back out of a False Claims Act case against the city of St. Paul, Minn., if St. Paul would drop a housing discrimination case headed for the Supreme Court. Perezâs critics say he made the deal to avoid a Supreme Court ruling on whether housing discrimination protections are legal. Perez has said the decision not to join the case was made by lower-level Justice attorneys.

“I donât know why your [GOP] caucus has such heartburn over things dealing with labor,” Reid said, citing delays in confirmation hearings for National Labor Relations Board members as well as Perez.

McConnell retorted that Democrats will “live to regret it” if they push through filibuster reform with minimal votes. Reid would need 51 votes to change the rules. Fifty-five senators caucus with the Democrats.

After his speech on the Senate floor, Reid met with Senate Democrats to discuss the “nuclear option” of changing Senate rules. He then filed cloture-the procedure for ending a filibuster, which requires the approval of three-fifths of the Senate — on seven nominees, including Perez, and scheduled votes for next week.

If Republicans continue to block votes on those nominees, Reid said, “I will go to the floor on Tuesday and do what I need to do.”

Even if Republicans do allow cloture on Perezâs nomination, they have already damaged their image with the Latino community by holding up a vote for so long, said Rafael Collazo, director of political campaigns for National Council of La Raza, an advocacy group for Latino Americans.

“Weâre very disappointed that this is even still an issue,” Collazo said. “Every question thatâs been brought about his nomination has been answered.”