U.S. businessman James H. Giffen, once accused of funneling $84 million in bribes to Kazakhstan’s President Nursultan Nazarbayev and other Kazakh officials, was praised by a judge as a Cold War hero at his sentencing today in Manhattan.

The oil industry middleman at the center of what was once billed as the U.S.’s biggest foreign bribery case received no jail time or probation after pleading guilty on Aug. 6 to giving inaccurate information about his foreign bank accounts on his 1996 tax return.

In a stunning end to the seven-year prosecution, U.S. District Judge William H. Pauley III spoked for 20 minutes about Giffin’s heroic acts, citing his work in 1980 to facilitate the emigration of thousands of Soviet Jews to the West and lauding him a “patriot.”

Pauley said the ordeal that Giffen, 69, underwent after his March 2003 arrest at John F. Kennedy Airport in New York, hurt his reputation and his business.  “How do you give a 69-year-old man his reputation back?” he asked, implying that the 60-plus count Foreign Corrupt Practices Act case against Giffen and his tiny New York-based investment bank Mercator Corp. never should have been brought. 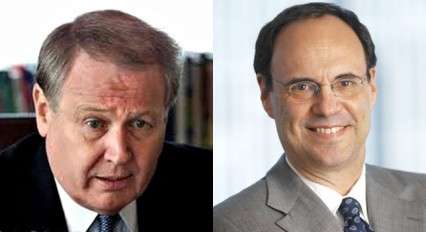 Pauley had clearly been struck by Giffen’s side of the story, including his argument that his business dealings were CIA-authorized operations. In the context of the Cold War, Giffen provided a “service,” Pauley said.

“Mr. Giffen was a significant source of information for the U.S. government and a conduit for secret communications to the Soviet Union and its leadership during the Cold War,” Pauley said. “He undertook that effort as a volunteer and was one of the only Americans with sustained and reliable access to the highest levels of Soviet officialdom. ”

Once the Soviet Union was reconfigured under Mikhail Gorbachev, Giffen set his sights on Kazakhstan and Nazarbayev, the judge said.

He advised on foreign investments, economic development and helping the country develop its vast natural resources, Pauley said.  All the while, Giffen was advancing U.S. interests, including corporate interests. “He acted as a conduit for communications on issues vital to America’s national interest in the region,” the judge said.

Pauley noted that Giffen’s personal fortune had dwindled with the filing of the indictment, which prevented him from traveling internationally and caused him to face the possibility of spending the rest of his years in prison.

“In the end, at the age of 69, how does Mr. Giffen reclaim his good name and reputation?” the judge asked. Pauley praised the government for reassessing the case.

Giffen, who lives in Mamaroneck, N.Y., has been free on $250,000 bail since prosecutors dropped their most serious charges on Aug. 6. Before that, his bail had been set at $10 million. Pauley today sentenced him to time served-one night in jail on the night of his 2003 arrest.

Giffen thanked Pauley today for his kind words. In August, Giffen admitted to failing to check a box on a tax return in 1996 to indicate he had signatory authority over any overseas bank accounts, pleading guilty to the misdemeanor tax charge. Mercator pleaded guilty as a corporate entity to a single FCPA violation for giving two snowmobiles worth $16,000 to Kazakh officials.

Giffen’s longtime attorney William Schwartz of Cooley LLP in New York was pleased that his client had appeared in Pauley’s courtroom for the last time. “This is a case that never should have been brought,” Schwartz said. “Jim is gratified he can finally resume his life and his career.”

Mercator, which has been run by Giffen’s son since 2003, continues to do business in Kazakhstan, a person familiar with the firm said.

The Justice Department found that Mercator advised Kazakhstan in connection with various transactions tied to the sale of portions of Kazakhstan’s oil and gas wealth.  Regarding Mercator’s guilty plea, the government said: “Three senior officials in the government of Kazakhstan had the power to substantially influence whether Mercator obtained and retained lucrative business, as well as the authority to pay Mercator substantial success fees if certain oil transactions closed, as well as to decide whether or not those transactions would close.”

Giffen carved a lucrative niche for himself during the Cold War as an authority on U.S.-Soviet trade. Through Mercator, he acted as an intermediary for oil giants including Mobil Oil Corp., now part of Exxon Mobil Corp., in Central Asia in the 1990s.

He denied charges that he bribed Kazakh officials and has spent the last seven years of his case in discovery, claiming that the U.S. government authorized his conduct. At a pre-trial conference in April, Pauley gave the lawyers another month to resolve ongoing discovery roadblocks involving security clearances. At his Aug. 6 plea hearing, Giffen told Pauley that he “willfully did not check the box” on his 1996 tax return involving a Swiss bank account linked to Condor Capital Management.

The DOJ case was begun under the Clinton administration, and had a high priority back then. But the case went nowhere in the George W. Bush years amid a huge covert effort by the Kazakhs to remove U.S. ally Nazarbayev from the case. Nazarbayev was named an unindicted co-conspirator.

The DOJ alleged that between 1995 and 2000, Giffen arranged for four or more oil giants — including Texaco, Amoco, Phillips Petroleum and Mobil Oil — to make illegal payments into accounts tied to Kazakhstan’s big oil and gas projects.

Government lawyers stumbled over a combination of problems, including a long-running dispute between prosecutors and intelligence officials who were unwilling to share classified information about Giffen’s dealings with Kazakhstan. A fourth set of prosecutors came into the case earlier this year.

The State Department also balked, according to the lawyers. American diplomats were uneasy with the prospect of offending Giffen’s Kazakh patrons, most notably Nazarbayev, one of the United States’ few reliable friends in Central Asia, where the Chinese and Russians also compete for influence.

The years of behind-the-scenes wrangling, coupled with adverse court rulings, slowly but irrevocably undermined the government’s original case. The setbacks seemed to weaken the resolve of prosecutors in Washington and the Southern District of New York, where attorneys are usually known for their swagger and combative style.

Business law Professor Paul Stephan, visiting at Columbia Law School this fall, said earlier this year that the outcome in Giffen offers lessons on what to expect from the current DOJ chiefs. “So we’ve learned there are considerations that will get the government to fold,” said Stephan, of the University of Virginia Law School in Charlottesville, where he holds a full professor chair.

“They don’t invest the resources unless there’s a high probability of winning. Mark Mendelsohn’s not there,” Stephan said, referring to the former deputy chief of the fraud section who led FCPA prosecutions. “When you have a change of leadership, the new ones see things differently.”

Assistant Attorney General Lanny Breuer publicly announced plans in May to reassess old and unresolved FCPA cases, and top-level prosecutors at Main Justice in Washington and the Southern District of New York were deeply engaged in coordinating an exit strategy from the Giffen case.

The State Department didn’t want prosecutors referring to Nazarbayev as a corrupt leader in their opening statement at trial, though he had been identified in court filings as a recipient of millions of dollars in bribes, said one former prosecutor.

The CIA tied up the discovery process by balking at disclosure of their intelligence gathering methods in Kazakhstan. And the government saw no end in sight. After five pre-trial adjournments, the burden of prosecuting one of the largest FCPA cases in U.S. history had become untenable, six current and former prosecutors said in interviews.

A series of court rulings had given Giffen an upper hand, the lawyers said, and the government decided to cut its losses — even if it meant, as it ultimately did, an epic about-face.

In the end it was a perfect storm for Giffen’s defense team at Cooley. (One of those lawyers, Kathleen Cassidy left her lucrative perch at the firm last month to become a SDNY assistant U.S. attorney, according to court records.)

“Bill Schwartz saw an opportunity to use the public authority defense,” said a person familiar with the case. “And it worked out better than he ever could have imagined in his wildest dreams.”

Mary Jacoby is the founder of Main Justice.