U.S. District Court Judge Susan Bolton, who sided with the U.S. Justice Department this week in a ruling against Arizona’s immigration bill, has been receiving threats since she issued her decision.

“She has been inundated,” said U.S. Marshal for Arizona David Gonzales, according to The Arizona Republic.

Gonzales described the judge as “tough as nails” and said he has been speaking with her daily. He indicated federal agents take the threats seriously, but said most of the hate mail came from people who were frustrated over her decision.

“About 99.9 percent of the inappropriate comments are people venting,” Gonzales said. “They are exercising their First Amendment rights, and a lot of it is perverted. But it’s that 0.1 percent that goes over the line that we are taking extra seriously.”

Gonzalez said that marshals would increase their security presence at the courthouse, but would not discuss specific security enhancements.

The U.S. Marshals Service has a policy of not commenting on protection details they may or may not have in place, said Jeff Carter, a spokesman for the Marshals Service.

The threats against Bolton fit into a wider nationwide pattern of increased threats against judges. Improper communications and threats to federal prosecutors and federal judges more than doubled during the mid-2000’s, according to an Office of the Inspector General report released earlier this year.

In an interview in May, U.S. Marshals Service Director John Clark said the increased number of threats against judges was related to the wide availability of information about judges and the publication of their decisions on the Internet.

“In today’s world, there are more individuals who are more prone to threatening judges. I think a lot of it has to do with the availability of information with the use of technology and the Internet. Individuals can find out more about particular cases and judges decisions. They can use Internet sources to find out more about the judge. So if someone is prone to want to threaten someone, there are a number of ways they can find material about a judge,” Clark said.

Clark said the U.S. Marshals has strengthened their already close relationship with the judiciary, and increased awareness about the importance of reporting any problems.

“Whenever I travel, I meet with chief judges and district judges and U.S. attorneys to make sure that they have my number, they know how to get a hold of me, and that we are available to them on short notice,” Clark said.

Speaking at the Migration Policy Institute’s E Pluribus Unum Prizes ceremony on Tuesday evening, Assistant Attorney General for Civil Rights Thomas Perez said that he hoped the furor over Arizona’s immigration law wouldn’t obscure the contributions of immigrants in the history of the United States. 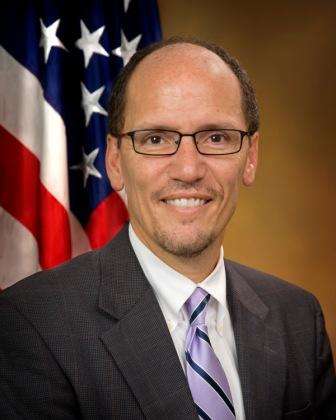 “I hope that we will not allow the storm clouds that we see sometimes on the horizon, whether they be in Arizona today, or wherever they might be tomorrow… to get in the way of our broader view,” Perez said.

At the awards ceremony for the non-partisan immigration think tank, Perez said it was essential that Congress pass a comprehensive immigration overhaul and called on members of both parties to change a system he said was broken.

Justice Department lawyers in the Civil Rights Division are said to be working around the clock analyzing Arizona’s immigration law, taking a look at whether to file a federal lawsuit challenging the law, an outside lawyer working with DOJ told The Washington Post. On Tuesday, Perez indicated that he came from a meeting related to deliberations over the immigration law.

The Arizona law is a hot button political topic. Republican Arizona Gov. Jan Brewer, who came into office when former Gov. Janet Napolitano was appointed as Homeland Security Secretary, is seeking a full term and facing a tough Republican primary in August. This week her campaign launched a commercial featuring video of Attorney General Eric Holder’s admission that he didn’t read the Arizona immigration law.

Holder has said he has concerns about the “unfortunate” law, but did not think it was motivated by racism. He has said that “it is clear that a failure to act on the federal level is resulting in state policies that undermine our most cherished values and, quite frankly, our safety.”

Perez met with a group opposed to the Arizona law for over an hour earlier this month, but would not say whether the Department of Justice would challenge the law.

On Tuesday, Perez said that the national conversation about immigrants too often focuses on the negative.

“We’re oftentimes losing the battle of the soundbite, we all too frequently only hear the bad stories about immigrants,” Perez said. The U.S. must “show the world that we continue to be a nation of immigrants that values every person.”

“We know the critical importance they are to our tax base, not simply documented immigrants but undocumented immigrants, who are paying billions of dollars into our Social Security system, hoping upon hope for comprehensive immigration reform, but frankly they’re playing the lottery right now because there is no guarantee of any return on investment,” said Perez.

Perez previously told the Anti-Defamation League that “ignorance and fear, coupled with the often heated rhetoric in Washington and in many state capitals, have no doubt fueled an increase in bias‐related incidents against Latinos nationwide.”

Outreach to immigrants has long been an important issue for Perez, who worked for the late senator and immigration advocate Ted Kennedy (D-Mass.).

Perez, the son of Dominican immigrants who fled a dictatorship and sought asylum in the U.S., was the first Latino member of the Montgomery County Council in the Maryland suburb of Washington, D.C., where he represented District Five — which largely consists of minorities. As a councilman, he proposed legislation to protect against discriminatory lending practices, a topic he’s taken on at the Justice Department.

As a team leader on the Obama transition team, Perez was an early contender to head U.S. Citizenship and Immigration Services. When he was nominated to head the Civil Rights Division, his work with CASA de Maryland, a support and advocacy group that helped Central American immigrants became a target for conservatives during his confirmation. Sen. Jeff Sessions (R-Ala.) argued the organization promoted illegal immigration, citing a pamphlet that advised illegal immigrants of their rights.

Also appearing at the ceremony was Rep. Mike Honda (D-Calif.), who has called the Arizona law “anti-American.”

Obama said Friday that immigration reform is a federal issue, and that enacting piecemeal measures at the state level would be leaving the door open to “irresponsibility by others,” reported the Washington Post.

“That includes, for example, the recent efforts in Arizona, which threaten to undermine basic notions of fairness that we cherish as Americans, as well as the trust between police and their communities that is so crucial to keeping us safe,” Obama said, according to the Post.

The investigation would fall to the Civil Rights Division, where Assistant Attorney General Thomas Perez has made combating discrimination against Latinos a top priority.

A Justice Department spokeswoman on Friday said the department would look at whether the new Arizona measure violates federal civil rights laws.