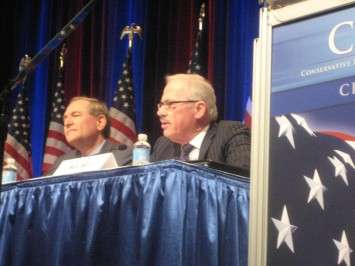 SEATTLE — More than 60 former top federal prosecutors attended the National Association of Former U.S. Attorneys annual conference here last weekend. Main Justice tagged along, and we confess: We were a little star struck at finally getting to meet many of the luminaries we’ve been covering since launching last spring.

Founded in 1979, NAFUSA (pronounced na-foo-sa) counts about 300 former U.S. Attorneys as members. Not all living former U.S Attorneys are members of the bipartisan organization, but admission is open to any ex-U.S. Attorney who has was appointed by the president, the Attorney General or a court.

The NAFUSA is a who’s who of ex-prosecutors. Many are founders of their own law firms, and several are partners at major international firms. NAFUSA can even count among its members most of the U.S. Attorneys fired in 2006 and former Georgia Rep. Bob Barr, who left the Republican Party to run as the 2008 presidential candidate of the Libertarian Party. 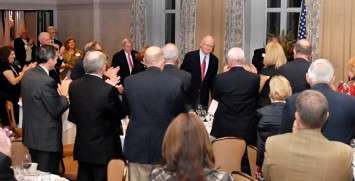 We even found out that these former U.S. Attorneys were a pretty fun group, despite having buttoned-down and high-influence jobs at some of the nation’s top law firms.

Not all of them wore suits. Some opted for open-buttoned polo shirts and jeans. A few donned cowboy boots.

They argued about which college football team was the best as they munched on banana nut bread and fruit for breakfast. They complained about the difficulty  in getting their hotel showers to function correctly. They even discussed their nights out at the bar and indulged in a few cocktails at conference events over the weekend.

Despite coming from different administrations stretching back to President Johnson, their political ideologies aren’t evident as they share jokes and drinks with each other.

“After awhile, you forget who is who,” said Margaret Person Currin, who served in the Eastern District of North Carolina from 1988 to 1993.

But with Barack Obama now in the White House, there were a lot of new faces at this conference from the Bush administration.

Many of the U.S. Attorneys in this class work for firms like Greenberg Traurig and the Ashcroft Law Firm, which was founded by former Attorney General John Ashcroft. For many of the Bush U.S. Attorneys and most NAFUSA members, the conference is a rare opportunity to catch up with former colleagues.

Johnny Sutton, who served in the Western District of Texas from 2001 to 2009, said keeping up friendships is “one of the main reasons” former U.S. Attorneys join NAFUSA and come to the conference. “You really develop strong relationships with these U.S. Attorneys over the years,” said Sutton, who is now with the Ashcroft Law Firm.

But outgoing NAFUSA President Mike McKay, who served in the Western District of Washington from 1989 to 1993, said there is more to the conference than catching up with former coworkers.

“Most people join initially to see their colleagues,” McKay said. “But once they join, there are a lot of other wonderful opportunities.”

A highlight of the weekend were remarks from former Deputy Attorney General William Ruckelshaus, who resigned in 1973 rather than carry out President Nixon’s orders to fire special Watergate prosecutor Archibald Cox in what became known as the Saturday Night Massacre. (We’ll have more about Ruckelshaus tomorrow).

“It is great to come here and exchange ideas,” said former NAFUSA President Ed Dowd, who served in the Eastern District of Missouri from 1993 to 1999.

The exchange of ideas for NAFUSA is not always academic. NAFUSA members have informal discussions with the administration officials, who speak at the conference. The organization also meets at least once a year with EOUSA and the Attorney General’s Advisory Committee, an influential policy-making and advisory body that serves as the voice of the U.S. Attorneys in Washington.

NAFUSA Executive Director Ron Woods, who served in the Southern District of Texas from 1990 to 1993, said the organization is not “banging on the door” of the Justice Department. But NAFUSA helps out anytime it is called on.

McKay said NAFUSA rarely takes formal positions on issues since it is a bipartisan organization. One notable exception was a letter to Bush Justice Department officials that expressed concern about the firing of nine U.S. Attorneys in 2006 — including McKay’s brother, John McKay, who was the Western District of Washington U.S. Attorney.

“It is unusual when we, as a group, make a public statement,” the outgoing NAFUSA president said.

“We have an abiding love of the Justice Department and that keeps us coming back [to the annual conference],” said Don Stern, who served in Massachusetts from 1993 to 2001. “It is the greatest law firm in the world.”