Conservative arguments against civilian trials for terrorism suspects appear to be making headway. Sixty-three percent of respondents to a recent Rasmussen Reports poll now say accused terrorists should go before military tribunals, up nine points from two years ago.

The national telephone survey of 1,000 likely voters people was conducted Dec. 9-10. The poll released Tuesday has a margin of sampling error of plus or minus three percentage points.

Former Vice President Dick Cheney and other conservatives attacked the decision. Later, bipartisan opposition to the costs and security issues of the trial emerged in New York, and President Barack Obama overruled Holder’s decision. Mohammed remains in limbo in the Guantanamo Bay prison with no military or civilian trial scheduled.

The Rasumussen poll also showed that  46 percent of respondents favor a ban on transferring suspected terrorists to the U.S., while 32 percent oppose such a ban, with 23 percent undecided. The responses come as Congress considers a legislative provision that would ban the transfer of terrorism suspects from the Guantanamo Bay prison camp to the U.S. for any reason. The legislation is attached to a “must-pass” $1 trillion bill to fund the government, according to The Daily Caller.

Holder has urged Congress not to pass the legislation.

The House Judiciary Committee’s top Republican, Lamar Smith of Texas, on Friday sent a letter to Attorney General Eric Holder requesting answers from the Obama administration regarding the anticipated prosecutions of Khalid Sheikh Mohammed and four others who allegedly conspired on the Sept. 11, 2001, terrorist attacks.

“Despite guarantees from Administration officials that KSM and his co-conspirators will be brought to justice, there is still a significant amount of uncertainty about how civilian trials for terrorists would work. Unfortunately, failure is an option in the federal courts.  Part of being innocent until proven guilty means there is no way to guarantee a successful trial.

The Obama administration is making promises it can’t keep.  If terrorists are brought to trial in the U.S., the courts will grant them additional constitutional rights, making it harder for prosecutors to obtain a conviction. Further, defense attorneys may argue successfully that statements made by Administration officials prejudiced the jury.

Terrorists should be treated as enemies of America — not common criminals. The American people deserve to have the facts before Gitmo terrorists are brought to the U.S. for trial.”

Here is Smith’s letter to Holder:

Despite bipartisan resistance to the plan, Obama seemed to agree with Holder that a civilian court was the proper place to prosecute the 9/11 mastermind and his alleged co-conspirators. ”The only two people who still believe in civilian trials are Holder and the President,” one of the attendees told Time Magazine for a behind-the-scenes story of the tussle over trial venue published Thursday.

At the same meeting, Obama’s chief of staff, Rahm Emanuel, countered with a tit-for-tat proposal: KSM would be tried in a military tribunal, in exchange for the support of Sen. Lindsey Graham (R-S.C.) for a new U.S. detention center to replace Guantanamo Bay. (Graham has warned that his support for closing Gitmo would be affected by a civilian trial for KSM, which he adamantly opposes.)

Obama was skeptical of the idea but approved the negotiations with Graham, which brings us to today. The Obama administration has said a decision is weeks off, but a senior aide involved in the discussions told Time, “If there’s a Rahm-Graham deal to be had, we’ll do it.”

White House press secretary Robert Gibbs said Tuesday the Obama administration will take several more weeks to reach a final decision on whether the Sept. 11th plotters will be tried in a military commission instead of a civilian court.

The Washington Post reported last week that aides to President Obama are close to recommending that self-proclaimed Sept. 11 mastermind Khalid Sheikh Mohammed and his alleged accomplices be tried in a military court. But Gibbs warned reporters at Tuesday’s daily White House press briefing that a decision will not happen in the coming days.

“I don’t expect a decision on that for several or many weeks,” Gibbs said.

The White House has faced pressure from both sides of the aisle to reverse Attorney General Eric Holder’s decision to try the terrorism suspects in a New York federal court. Obama is now personally involved in selecting the location of the KSM trial, Gibbs said.

“The president obviously has gotten involved because Congress has actively been involved in venue options for any trial involving Khalid Sheikh Mohammed,” Gibbs said.

In a full page ad in the Sunday New York Times, the American Civil Liberties Union appealed to President Barack Obama to keep the trial of the Sept. 11 plotters, including alleged mastermind Khalid Sheikh Mohammed, in civilian courts.

In November 2009, Attorney General Eric Holder announced that the Justice Department would try KSM in New York City near the site of the World Trade Center attacks. After initially expressing support for the trial, New York City business leaders and Mayor Michael Bloomberg changed course, complaining in January about the potential cost and disruption of a trial in Manhattan. Last week, The Washington Post reported that President Obama’s advisers are close to recommending that the DOJ return KSM to a military tribunal for prosecution.

In the ad, which features an image of Obama morphing into President George W. Bush, the ACLU calls on the president to support Holder’s original plan to try KSM and other Sept. 11, 2001, conspirators in civilian courts.

The ACLU has been critical of several of Obama’s national security and terrorism policies, saying his administration is beginning to have too many similarities to the Bush administration, such as a reliance on a “state secrets” privilege to keep information on some terrorism suspects out of court.

Anthony Romero, executive director of the ACLU, recently criticized the shift to military commissions, saying if such a change is made Obama would deal “a death blow to his own Justice Department.” 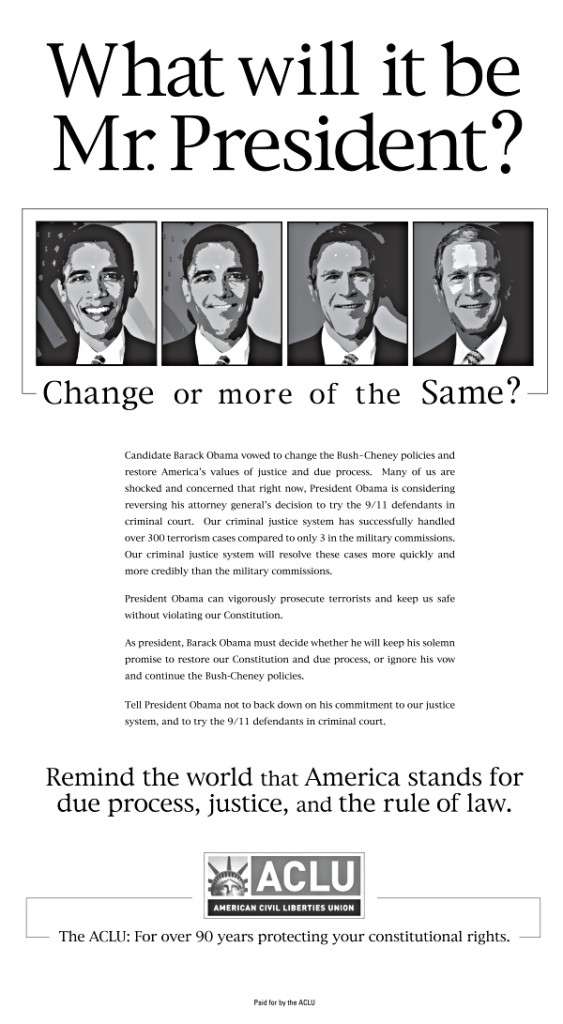 The full page ad the ACLU took out in the Sunday New York Times.

President Barack Obama’s advisers are “nearing a recommendation” that the self-proclaimed mastermind of the Sept. 11, 2001 terrorist attacks, Khalid Sheikh Mohammed, return to a military tribunal for prosecution, the Washington Post reports. 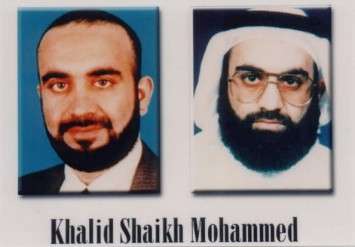 The alleged 9/11 mastermind in photographs released by the FBI in 2001. (Getty Images)

The White House had already overruled Attorney General Eric Holder’s decision, announced with fanfare in November, to try Mohammed in New York City, near the site of the demolished World Trade Center towers. That reversal came after New York City business leaders and Mayor Michael Bloomberg complained in January about the cost and disruption of a trial in Manhattan.

Bloomberg’s remarks set off a stampede among Democratic officials, who rushed to oppose a trial in Manhattan, prompting the administration to look for a new venue.

Then came hints that the administration would drop the whole idea of civilian trials for KSM, as Mohammed is known in government circles, and other Guantanamo Bay detainees. The White House was struggling to win support in Congress for closing Guantanamo Bay, after blowing a self-imposed one-year deadline for shuttering the military detention facility in Cuba. Civilian trials were an obstacle to winning that support.

Civil liberty groups, already queasy about Obama administration policies that hewed in their view too closely to the George W. Bush administration, such as a reliance on a “state secrets” privilege to keep information on some terrorism suspects out of court, began bracing for the worst.

With today’s report that KSM isn’t likely to be tried in civilian court at all, Anthony Romero,executive director of the American Civil Liberties Union, doesn’t hold back.

“If President Obama reverses Holder’s decision to try the 9/11 defendants in criminal court and retreats to using the Bush military commissions, he deals a death blow to his own Justice Department, breaks a clear campaign promise to restore the rule of law and demonstrates that the promises to his constituents are all up for grabs,” Romero told the Post.

“The military commissions have not worked, they are doomed to failure, and Obama will invariably find himself running for office again while not achieving justice for the 9/11 attacks,” Romero said.

“Federal courts have proven time and again that they are capable of handling terrorism cases.  They have successfully tried hundreds of terrorism cases, and nearly 350 terrorists are being held securely in our federal prisons today.  In stark contrast to that record, very few of the detainees held at Guantanamo Bay have been brought to justice through military commissions.  I believe strongly in letting the Justice Department make prosecutorial decisions, and I support this administration’s decision to try detainees in federal courts when appropriate.

“Since 9/11, federal courts have tried more than 100 terrorism cases, including several high-profile cases with notorious terrorists, proving they can handle sensitive classified information, security, and other legal and logistical issues.  I do not, and will not, support measures that will tie the hands of law enforcement and other security agencies as they move to bring these criminals to justice.  Our courts, our legal system, and our prisons repeatedly have shown they are up to the task.  Rather than playing politics with these questions or cowering from criminals, we should trust in the proven successes of a criminal justice system that has become the envy of the world.”