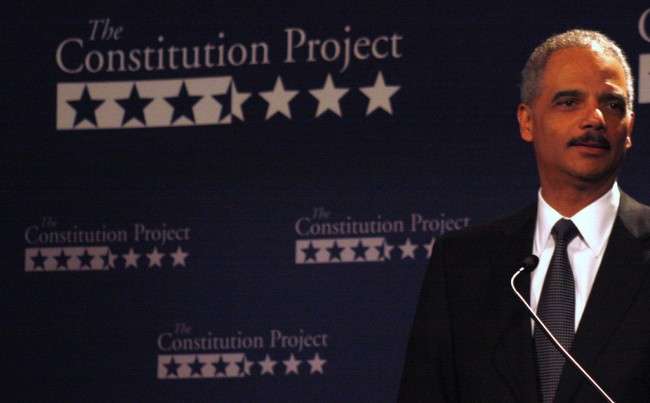 Attorney General Eric Holder defended the Obama administration’s anti-terrorism policies before a liberal-leaning legal group, The Constitution Project, Thursday. The group has been critical of the administration’s use of indefinite detention, military commissions and the state secrets doctrine.

Holder said that the Obama administration must use both military commissions and civilian courts to prosecute terrorism suspects, deciding each case on its individual merits.

“Just as on a battlefield, every arm of the government must use every appropriate weapon available to win this war. I know that some of those weapons may be unpopular. But when it comes to protecting the American people, the charge that we are ‘coddling terrorists’ is no more accurate than the equally vehement cry that we have ‘rubber-stamped the Bush administration’s counterterrorism policies’,” Holder said.

In her introduction of Holder, Virginia Sloan, the president of the group, noted the criticism Holder faces on the other side of the political spectrum for the administration’s terrorism policies.

“You have to operate every moment of your day in a political climate that promotes fear and harsh partisanship,” Sloan said.

“Just yesterday I had the chance to discuss some of these challenges with my friends at the Senate Judiciary committee,” Holder said to laughs from the audience. “Now as I look around this room, I realized that just like yesterday, I’m speaking to some who may not always agree with the entirety of our approach when it comes to protecting our national security. In fact, one of the biggest things I’ve learned over the last year is that it is simply not possible for the Attorney General to make everyone happy.”

But Holder said that everyone in the room shared the goal of protecting America by sticking to the rule of law. He said that the U.S. was facing a serious threat and was “a nation at war,” but that it is also a nation of laws.

Holder’s prepared remarks are available here. Main Justice spoke with several liberal groups about their concerns over the actions of the Justice Department in February.

Soon after taking office, President Barack Obama articulated a more limited position than his predecessor on the power to detain suspected members of al Qaeda without trial. Rather than assuming inherent authority to hold people suspected of ties to the terrorist group or its affiliates, Obama, through the Justice Department, described his power as emanating from the authorization granted by Congress to use military force against the perpetrators of the Sept. 11 attacks and defined by the laws of war. The president, the department told a federal judge in March 2009, could detain only people who were part of al Qaeda, its affiliates or their “substantial” supporters.

In Monday’s New York Times, Charlie Savage notes how lawyers in the administration have debated counterterrorism policies against this backdrop. A deep division has emerged, unsurprisingly, between the State and Defense departments, which squared off regularly during the Bush administration (with the Defense Department claiming victory more often than not).

On the one hand, the State Department’s top lawyer, Harold Koh, has argued behind-the-scenes that there is no basis in the laws of war to detain as wartime prisoners supporters of al Qaeda captured far away from the battlefield. The contours of this position emerged in a secret memo by Koh, focusing on the case of Belkacem Bensayah, an Algerian man who had been arrested in Bosnia and placed in the U.S. detention camp at Guantanamo Bay, Cuba. He was accused of facilitating the travel of those who wanted to go to Afghanistan to join al Qaeda.

A federal judge ruled that Bensayah’s support justified holding him prisoner. The Justice Department asked an appeals court to uphold the ruling.

Defense Department General Counsel Jeh Johnson produced his own secret memo, arguing for “a more flexible interpretation of who could be detained under the laws of war — now or in the future,” Savage writes in Monday’s Times.

According to Savage, David Barron, the head of the Office of Legal Counsel, was called in to referee the debate, but ultimately did not:

In September 2009, national-security officials from across the government packed into the Office of Legal Counsel’s conference room on the fifth floor of the Justice Department, lining the walls, to watch Mr. Koh and Mr. Johnson debate around a long table. It was up to Mr. Barron, who sat at the head of the table, to decide who was right.

But he did not. Instead, days later, he circulated a preliminary draft memorandum stating that while the Office of Legal Counsel had found no precedents justifying the detention of mere supporters of al Qaeda who were picked up far away from enemy forces, it was not prepared to state any definitive conclusion.

In the end, the Justice Department decided to avoid the question by changing the subject. They asked to appeals court to adopt the position that actions taken by people like Bensayah effectively made them part of the terrorist organization, rather than mere supporters, and thus detainable under both the State and Defense departments’ interpretations. The appeals court has not ruled in the case.

Defense and State are aligned on other matters, Savage writes, as when two judges on the U.S. Court of Appeals for the D.C. Circuit ruled in January that the laws of armed conflict did not limit the president’s war powers. Career lawyers in the Justice Department’s Civil Division, who are defending the Guantanamo cases in federal court, wanted to use the ruling to their advantage.

But Barron, Koh and Johnson felt the administration should continue abiding by the laws of war and thought the decision was susceptible to reversal, according to Savage. The Justice Department has since cited the ruling in classified briefs as precedent while maintaining its argument that the president is bound by laws of war.

As Savage writes, “The debate would go on.”

Conservatives have been critical of the administration’s decision to charge the alleged Christmas Day attempted airline bomber, Umar Farouk Abdulmutallab, in federal court as a criminal rather than put him in military custody for interrogation.

Bond said yesterday that John Brennan, President Obama’s chief homeland security and counterterrorism adviser, “needs to go” because of his role in the events surrounding the decision on how to handle alleged bomber.

And today, Bond told The Wall Street Journal’s Washington Wire blog, “I think Eric Holder has been totally wrong, and he should go too. It’s a question of trust,” adding: “They [Holder and Brennan] both came up short.”

Bond also took a dig at Holder for the Attorney General’s decision to try five alleged 9/11 plotters in a New York City federal court. The terrorism suspects will now likely be tried elsewhere after immense criticism from local politicians and members of Congress.

“Eric Holder said the 9/11 trial in New York will be the defining moment of his tenure,” Bond told the Washington Wire. “I hope it is.”

The White House has supported its national security leaders, according to the blog. White House press secretary Robert Gibbs earlier this week called on Bond to apologize for his barbs, the Washington Wire said.

A new audit report by Department of Justice Inspector General Glen Fine says the Federal Bureau of Investigation has been slow to complete translations of electronic data collected in foreign languages. But the Bureau has shown improvement, according to the report, which was released today.

While the FBI managed to slog through 4.8 million pages of foreign-language texts from 2004 to 2008, the agency had only translated two thirds of its backlogged electronic information from the same period. That left 25 percent of its audio from 2005 to 2008 untranslated. The agency’s translation staff was also reduced, from 1,338 in 2005 to 1,298 in 2008. According to an article in the New York Times, The FBI met its hiring targets in 2008 for only two of 14 targeted languages.

In 2004, Fine wrote, there were “significant backlogs” of audio information collected on the FBI’s “highest priority” cases. In 2005 that backlog, even on the most important cases, had increased, and the FBI “was not prioritizing” the translation of the material, the report said.

For fiscal year 2008, according to the OIG audit, the FBI recorded almost 880,000 hours of audio in foreign languages and English, 1.6 million pages of text and almost 28 million electronic files.

While Fine’s report praised the FBI for its catch-up efforts, the Inspector General noted that the FBI left more than 180,000 hours of data in terrorism and counterintelligence investigations untranslated. The recommended the FBI improve its quality control standards for its translators and revamp its record-keeping system to better keep track of its data.

It’s crucial the FBI have the resources to translate non-English material, the OIG report said, because “without accurate and timely translations, the FBI’s ability to effectively investigate criminal enterprises that communicate in a foreign language is severely hampered.”

FBI Deputy Director John Pistole said in a written statement that the FBI’s translation efforts were making progress. “With regard to counterintelligence collections, we are doing a careful job of prioritizing and monitoring the most important material,” Pistole said.

The FBI released another statement on its Web site in response to the OIG’s audit, in which it described further efforts to improve its translation operation, including a two-week crash course for new department linguists, “and the establishment of the Quality Control Standards Unit, which ensures compliance with the linguist quality control standards.”

Since the World Trade Center attacks on Sept. 11, 2001, the FBI said, its effort to translate foreign language data and information has doubled.

Sen. Chuck Grassley (R-Iowa), a member of the Senate Judiciary Committee, released a statement urging the FBI to redouble its efforts. ‘These shortcomings just make it harder to get the bad guys,” Grassley said in the written statement. “The FBI needs their feet held to the fire in order to make substantive changes in the translation area.”